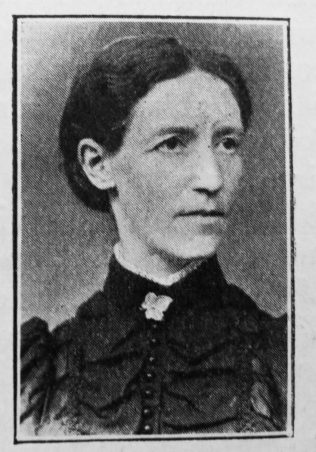 Transcription of Obituary in the Primitive Methodist Magazine by W. Evans

Mrs. Goodwin, wife of Mr. Walter Goodwin (superintendent of our Sunday School, Newtown, Macclesfield Circuit) has passed away to the higher service of heaven. Our sister came of a good Primitive Methodist stock, her father being a highly respected local preacher at the Hope in Ludlow Circuit.

When quite young she came to a situation in Macclesfield, attended our Beech Lane Church and there, under the ministry of the late Rev. W. Evans (1) she made a full surrender of herself to Jesus Christ, joined the church and became a teacher in the Sunday School. In 1873 she was joined in happy union to the one who now mourns his loss. She then joined our Newtown Church where she remained a consistent member to the day of her death. She was a most indefatigable worker, her portrait may be found in the closing verses of Proverbs xxxi. 24-31.

She was for many years and until her health gave way the teacher of the adult Bible class of girls, also president of the Christian Endeavour. I have received many testimonies from ministers and friends as to our sister’s Christian character. Space forbids more than one, i.e., from the Rev. J. Aston. He says:
“I recall the many times that her trust in God in those days proved an inspiration to me in the difficult work we were then engaged in. What a help she was to a minister! How loyally she stood by his side to cheer and help. She was the friend of all, the enemy of none.”

Her illness was long and painful, but the Gospel she taught to others now sustained her. Everything was done that human skill and kindness could do, but in vain, and our sister sank into the arms of Jesus on the 3rd September, 1906, aged fifty-seven. A memorial service was conducted in our Newtown Church by the writer, October 7th, and the large congregation present testified to the esteem in which our sister is held.

Martha was baptised on 13 February 1848 at Stanton Lacy, nr Ludlow, Shropshire. Her parents were George, who worked the land, and Maria.

She married Walter Goodwin (1853-1929), a silk weaver and later a knitted hosiery manufacturer, in late 1873 at Macclesfield, Cheshire. Census returns identify one child.

Walter married Sarah Ann Dean in the summer of 1907 at Macclesfield.