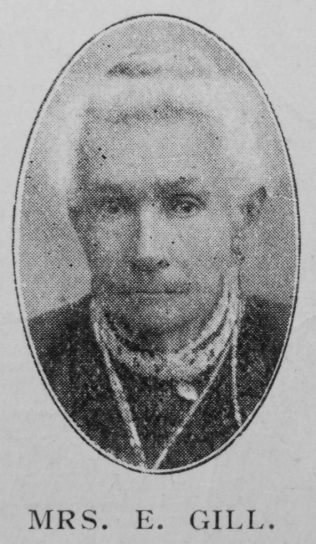 Transcription of obituary published in the Primitive Methodist Magazine by E.E. Fisher

Our late lamented friend was born on February 28th, 1831, at King’s Clere, in Hampshire. She was the daughter of John and Mary Eliot, who worshipped at the Wesleyan Church in the village. Her first acquaintance with Primitive Methodism was made during childhood’s days, when our people first missioned her native village, her home being thrown open to the preachers. Whilst in her teens she removed to Reading, where she resided the rest of her life. She soon became a member of our Church, and continued such until the day of her death.

On the 20th June, 1861, our sister was married to Edwin Gill, himself a Primitive Methodist. The marriage proved an exception-happy one. During the last ten years of her life Mrs. Gill suffered from a serious form of heart failure. Our sister passed away peacefully on July 26th, 1912 at the ripe age of eighty-one, leaving a husband, two sons and one daughter to mourn her loss. Her mortal remains were interred in Reading Cemetery on July 31st, the funeral being conducted by Revs. E.E. Fisher and J.A. Alderson.

Our late friend was a true mother in Israel. Possessing a very strong and yet tender personality, she was a queen of the home. For years she would sit during the long winter evenings making garments for the poor, which were distributed by our South London: Mission. On several occasions, too, she attended the anniversary services in connection with our orphan home at Arlesford, and on each visit she gave a threepenny piece to each of the children. Our sister has left a noble example to others, and in a ripe age has passed to her reward and her children rise up to call her blessed.

Esther was born on 28 February 1831 at Highclere, Hampshire, to parents John, who worked the land, and Mary.

Before her marriage Esther worked in domestic service.