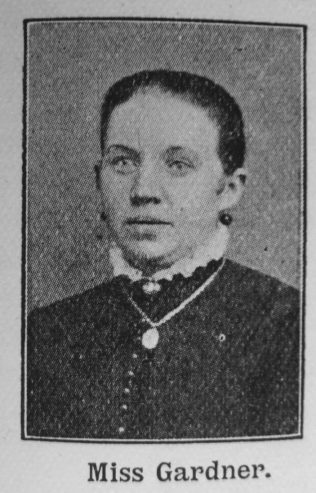 Transcription of Obituary in the Primitive Methodist Magazine by George F. Johnson

In the presence of a large number of the members of our Saville Street Church the remains of our much-loved sister, Mary Gardner, were laid to rest in Preston Cemetery on Wednesday February 19th, 1902.

Miss Gardner was born at Mount Pleasant, Weardale, November 26th, 1863, and was the daughter of James and Jane Gardner, who were for many years honoured members of our church in Weardale. The child of a godly ancestry, and brought up in an atmosphere charged with religious thought and feeling, it is no surprising thing that our late sister should early have had religious impressions and desires, and become the subject of Divine grace. In her fourteenth year, whilst revival services were being conducted at Westgate by Mr. John Bainbridge, our sister yielded herself fully unto the Lord, and rejoiced in a consciousness of acceptance through Christ Jesus. She at once entered into Christian fellowship, and from 1877 until 1891, was a consistent and devoted member of the Westgate Society.

In 1891, the family removed to North Shields, and Miss Gardner became a member of the Saville Street Society. The bustle and activity of the town were a great change from the quiet, contemplative mood of the dale, but our sister speedily gained the hearts of the people, and entered heartily into the activities of the Church for a brief period, when the hand of affliction was laid upon her, and for two years she endured a living martyrdom. Under those circumstances the depth of her piety and the strength of her Christian character were seen in all their beauty. In affliction she adorned the doctrine of God. At times she suffered excruciating pain, but through the long years no word of repining or complaint fell from her lips. In patience she possessed her soul. Nor was she only patient, but very cheerful. Those who went to cheer her, found that she did even more for them. The Rev. Henry Yooll  writes: “To visit her was to me a means of grace and a holy inspiration, for it helped one’s faith in the religion of Jesus Christ, and in the immortal hope beyond.” Though unable to attend God’s house, striking testimony to our sister’s beautiful disposition is seen in the fact that though her illness extended over so long a period she never had to complain that she was forgotten or neglected. Those who visited her once longed to go again.

For some time before her death it was evident that the earthly house was fast nearing its dissolution, but the end came somewhat suddenly, and on Sunday, February 16th, 1902, in her thirty-ninth year, our much-loved sister passed from all her sufferings into the land where there is no more pain. She has gone out of our sight, but the memory of this gentle, patient, Christ-like woman will be fragrant for years to come.

Records for Mary are in the surname Gardiner. Her father James was a lead miner in Weardale.