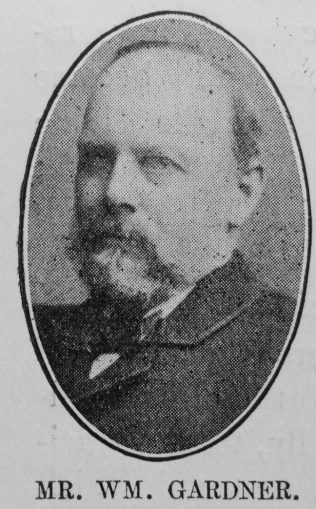 Transcription of Obituary published in the Primitive Methodist Magazine by John P. Bellingham

Mr. William Gardner, of Laxey, Isle of Man, exchanged mortality for life on October 9th, 1908, in his seventy-fifth year. Born at Frome, December, 1832, when quite young he removed to Chippenham, where he became a member of our Society, and at the age of eighteen began his fifty-seven years’ career as a local preacher. He married at Bath, and shortly afterwards removed to Swansea, and then to Cardiff, where he rendered great aid to the Mount Tabor new chapel; he became a trustee and treasurer of the chapel fund. He also did good work as a class leader and local preacher, but his chief work was in the Sunday School.

Mr. Gardner frequently represented his circuit at the District meeting, and several times he has represented his District at Conference. He had courage to stand by his convictions, and was cool and keen in debate. His home was marked by hospitality, and both ministers and laymen were welcomed at his table.

In 1898, having retired from business, he removed to the Isle of Man. His Christian character and beneficence much impressed the people at Laxey. He his left a widow and daughter at Laxey. They with great affection and tenderness ministered to him in his affliction and soothed his soul in the pains of death. His funeral on October 13th was largely attended. Rev. J. Burton gave an address at the Minorca Chapel, and read the service at the grave in the Lonan Churchyard. Revs. J.R. Tranmer, J. Travis, and many others were present.

Rev. J.R. Tranmer says: “Mr. William Gardner was a man of singularly strong and vivid personality. His mind was broad and well balanced, whilst his heart was large and bountiful. Ever an ardent lover of his church, all its interests were dear to him, and found in him a ready helper and a generous contributor. The quality of his religious life was rich and radiant. It was impossible to be long in his company without perceiving how deeply rooted were his convictions.”

Rev. J. Burton states: “As long as health permitted he regularly attended his class-meeting and the preaching services. He took a deep interest in every branch of work connected with the church, and became a trustee for Laxey Chapel and schoolroom. He was treasurer for the Circuit Centenary Fund, and not only suggested to the Local Committee how we could raise our quota, but headed the list with a handsome promise. Asa local preacher his services were much appreciated. He was kind to the poor and needy, and freely supported the church.”

Rev. J. Travis says: “I have known the late Mr. Gardner many years, and his departure has deprived me of a valued friend. He was well read and could discuss with intelligence the leading topics of the day. He had a wide outlook and was cosmopolitan in his sympathies. His sense of duty was very strong both in regard to domestic, business, and church life. He never shirked any responsibility. He was unreservedly loyal to his church, was not parochial but Connexional. Whatever touched Primitive Methodism touched him.”

William was born in December 1832 at Frome, Somerset, to parents Thomas, who died before 1841, and Eliza. Eliza married William Dowyell, a labourer (1851). William was baptised on 13 January 1833 at Frome Independent Chapel.

He married Jane Gardner (abt1826-1891) in the spring of 1854 at Bath, Somerset. Census returns identify seven children.