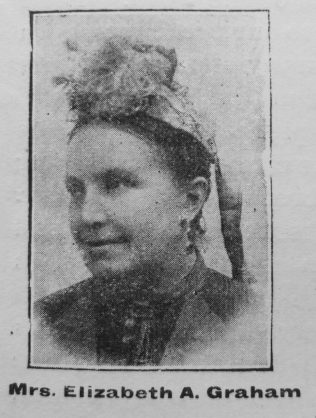 Transcription of Obituary in the Primitive Methodist Magazine by Adam Morton

When it became known that on March 10th, 1903, the subject of this memoir, the wife of Walter Graham, of Bury, Lancashire, had peacefully but suddenly passed away, a feeling almost of consternation mingled with keen regret was experienced by a large circle of friends.

Mrs. Graham was the daughter of John and Ann Goddard, of Moult House Academy, Marple, Cheshire. She was born on September 23rd, 1839, and was brought up in the tenets of the Church of England. Before she had reached womanhood she had the great misfortune, within a short period, to lose both her father and mother.

About a year after her father’s death, Mrs. Graham went to New Mills, Derbyshire, to reside with her cousins, Mr. and Mrs. Goddard, staunch Primitive Methodists. From this time she attended the Primitive Methodist Chapel, and became an active worker in the Sunday school. Her worth was soon recognised by the authorities, and in a short time she was entrusted with the care of a large class, the senior class of females. For this position she was, by education, the possession of strong common sense, and the grace of God well fitted. Her labours in this capacity were profitable to her scholars, and creditable to herself; and only came to an end when on July 9th, 1867, she became the wife of the Rev. Walter Graham. The union has been a most happy one.

The trials and hardships, as well as the joys and pleasures of the life of a minister’s wife, cannot be rightly estimated by anyone except the wives themselves. But Mrs. Graham, for nearly thirty-six years, in joy and sorrow, sunshine and shade, quietly did her duty to her husband, her children, and the Church.

She “travelled” with her husband in Preston, Castletown, Bradwell, Stockport second, Blackburn first, Fleetwood, Liverpool first, Warrington, Lowton, Manchester third, Manchester fifth, Dalton and Bury Circuits. In all of these she proved a real helpmeet to her husband, and at the same time secured the affection and esteem of a large number of friends. Mrs. Graham was of the quiet unobtrusive order of women, and shrank from publicity unless it was absolutely necessary.

Her Christianity, though not loud in its pretensions and profession, was very practical in its application. Many of the poorer members of our Church have received much needed help at the hands of our departed sister. She was of a most genial nature, and ever ready to speak a word of cheer to any who needed it.

The writer first met Mrs. Graham in 1870, and has since then had many opportunities of observing her disposition and character. Her kindness to him (the writer) will never be forgotten.

She had two sons, both of them being promising and estimable young men. It would, indeed, be difficult to find a better mother than Mrs. Graham was. To a great extent her life was bound up in the lives and happiness of her sons, her affection for them being most marked.

About six years ago the younger of the two, after a period of ill-health, borne with fortitude of mind and Christian resignation, unexpectedly passed away. This sad event produced a profound impression on his mother, and proved to be a blow from which she never recovered. For sometime it had been difficult for her to walk, yet she went to the chapel as often as she could. She was only confined to her bed for a few days, and up to the night before her death Mr. Graham did not think she was about to be taken from him. In the early morning of March 10th, however, without a sigh or a groan, she exchanged mortality for life. On Saturday, March 14th, a great number of sympathising friends, both ministerial and lay, from the Manchester and Liverpool districts, gathered in our Stratford Church to pay a tribute of respect to the departed and to show their sympathy with the bereaved husband and the son. The Rev. James Travis, President of the National Free Churches, gave a most fitting and touching address, in which he spoke most highly of the deceased lady. The Revs. F.W. Brett, J. Yearsley, W. Barker, and A. Morton, took part in the service in church, and the Revs. J. Travis, G. Parkin, B.D., and A. Beavan conducted the service in the cemetery. Her remains were placed in the same grave in which her dearly-loved son was interred.

Humanly speaking, her removal from the side of her husband at the present time seems an overwhelming calamity.* But God our Father has willed it otherwise; and though to us and to her husband, the death of Mrs. Graham may appear mysterious, we may be comforted by the knowledge that the mystery will one day will be explained. It is a consolation to our friend and his son, to know that they have the deepest sympathy of all their friends (and they are very many). We pray that the blessing of our Heavenly Father may even rest upon them, and that they and ourselves may meet our sister again in the land where partings are unknown.

(*Rev. W. Graham has since passed to the eternal re-union.)

Baptismal records identify that Elizabeth was baptised on 14 October 1838 at Marple, Cheshire. (Not 1839 as stated in the obituary.) Her father, John, was a schoolmaster.

Her cousin, Hesskey Goddard (b abt1816), with whom she lived at Hayfield, Derbyshire, was a butcher. The 1861 census identifies that Elizabeth worked as a milliner and dressmaker before her marriage.