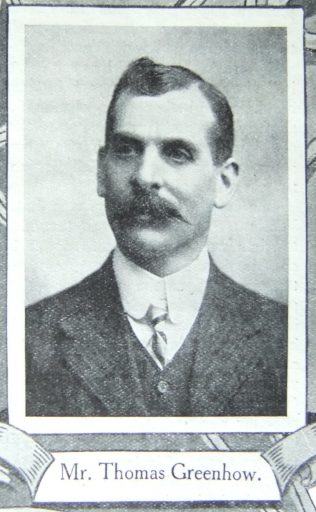 Thomas Greenhow is a man well worth knowing. Of Primitive Methodist ancestry, he has entered into his heritage of toil on behalf of his Church. For some years he has been Circuit Chancellor, and District Committee representative, and the work falling to his lot has been promptly and faithfully done. A strong man, possessed of keen sympathy, a good voice, a ready pen, and excellent business habits, he is capable of inspiring confidence and urging forward any good work. He has, from boyhood, been an employee of the Co-operative Society, and worked his way to the management of the drapery department in the fine local branch of that organisation. His own punctuality, industry, and enterprise he would fain instil into others. Let the Church be electric with religious fervour and expectancy, and he is in his element. Now in his prime, may he be spared many years for joyous service!

Thomas was born abt 1863 at Ellenborough, Dearham, nr Maryport, Cumberland, to parents John and Hannah. John was a coal miner.

Thomas was circuit steward for seventeen years in the Maryport Circuit. He served as Sunday School teacher and superintendent, temperance worker and trust secretary.

Thomas married Jane Wood (abt1861-1938) in the spring of 1885 in the Cockermouth Registration District. Census returns identify four of five children.