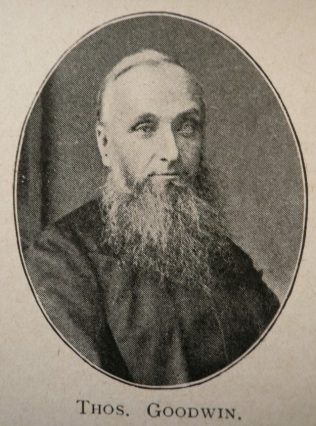 Thomas Goodwin was born at Alstonefield, Staffordshire, nr. Ashbourne, in 1829, the son of William and Sophia Goodwin. William was a farmer ( b.1796).  Thomas moved to Leek,  where he met and married Sarah, and their first child was born there in 1848. Shortly after they moved to Tunstall, where they were living in Mill Street in 1851, and Thomas was working as a coal miner.  By 1860, circuit plans show that Thomas was a Primitive Methodist local preacher in the Tunstall Circuit.  The Goodwin family were to play a significant role in the life of Jubilee Chapel, Tunstall.

In 1861 Thomas was an Iron Miner, living in Greenfields Tunstall. In 1871 his occupation was given in the Census as Mining Contactor, and the family had moved to Peel Street. By 1881 they were living at 20 Temple Street, where he ran a business as a Grocer.

Thomas married Sarah Pickford in 1846. They had at least 5 children.