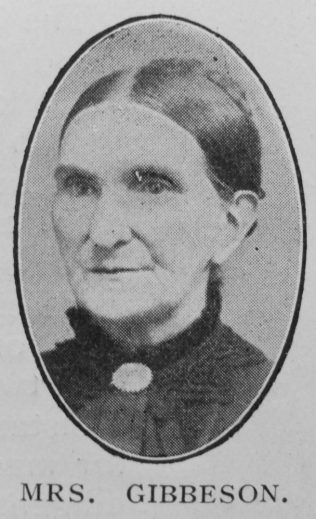 The Guide Post Church and Ashington Circuit have sustained a great loss in the death of Mrs. Sarah Gibbeson, October 8th, 1910. Born at Berwick in 1833 and early left an orphan, she removed to Earsdon, Northumberland, where she was converted in a mission conducted by Rev. Jos. Spoor fifty-five years ago. John Gibbeson, converted in the same revival, married her in 1856, and they laboured together for the church they loved.

At Choppington and Guide Post, where they lived after Bro. Gibbeson’s retirement in 1888, they have been useful and honoured members. Mrs. Gibbeson loyally served the church. In helping her friends, too, she was ever busy. She had that sunny disposition which sheds blessing all around. Her home was ideal. Husband and family adored her, and the preacher was always welcome at her fireside.

The service in Choppington Churchyard, October 13th, was conducted by Revs. W. Pickering and J.F. Loveday. Her gracious presence will live in our hearts for many a day. We deeply sympathise with our brother in his loneliness, but he knows “ ’Tis but a little while.”

She married John Gibbeson (abt1830-1916), a coal miner, in the summer of 1856 in the Tynemouth Registration District, Northumberland. Census returns and birth records identify five children.