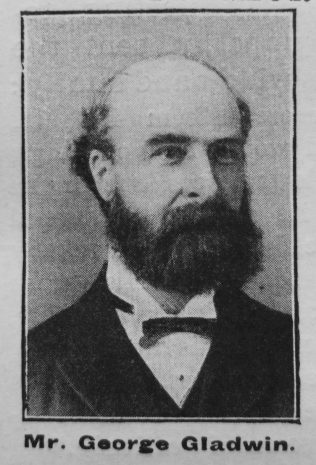 Transcription of Obituary in the Primitive Methodist Magazine by Charles Dudley

George Gladwin was born at Attercliffe, Sheffield, August 6th, 1845. When quite a youth he came to Stanley Street and joined the Church there; became a local preacher at the age of 19, and was married in the year 1870. He was in the employment of Samuel Osborne and Co. for 28 years. He was an ardent Forester, and attained the position of trustee of the High Court. Among other interests were the study of phrenology and physiology, and also ambulance work. At the time of his death he held offices in the Sheffield 2nd Circuit of circuit steward, local preacher, class leader, and assistant society steward. These offices he sustained with marked ability. He was a conspicuous figure in the world and in the Church. He made his mark wherever he went. Bold, brave, stalwart, heroic, and out-spoken, he feared no man. He was as fearless in telling men of their faults as of their virtues. He never winked at wrong doing. There was nothing put on, no sham, no hypocrisy about him. He tried to square his life and conduct by the word of God.

He took to his bed on Monday, February 23rd, 1903, and gradually grew worse as the days passed by; so that on Saturday evening he quietly passed away to his Father in Heaven. During his last few days on earth, though in much pain and suffering, he was remarkably happy. The writer said to him on the day of his departure, “The God whom you have served for the last forty years will not leave you now. The religion of Jesus that you have professed for so long sustains you now in this trying hour; does it not?” He said, “Ah! He is still precious. I need no other argument, I want no other plea: it is enough that Jesus died, and that he died for me.” “You feel happy?” He answered “Yes,” and then he quietly articulated.
“My Jesus to know and to feel his blood flow.
It is life everlasting, it is heaven below.”

An hour before his death he called his family to his bedside. He kissed his wife and children and then calmly fell asleep. The weary wheels of life stood still and George Gladwin was no more.

The Sunday following an impressive service was held in Stanley Street Chapel, where he had been a conspicuous figure for forty years. The writer spoke of his departure. Miss Dudley impressively rendered the Dead March in “Saul.” He was interred at Burngreave Cemetery, March 3rd. Hundreds, from all parts of the city, came to pay their respect to our departed brother.
“Day by day, Oh! how we miss him,
No one on this earth can tell:
But in heaven we’re going to meet him,
Evermore with him to dwell.”

George was baptised on 7 September 1845 at Attercliffe, Yorkshire. His parents were William, a joiner & wheelwright, and Mary. Mary had died by the time of the 1851 census.