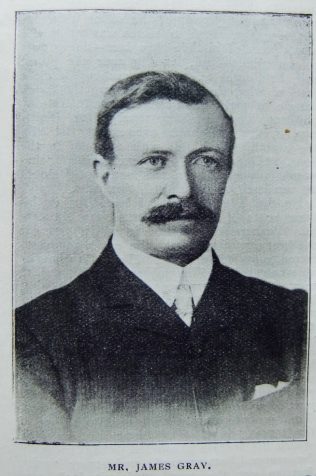 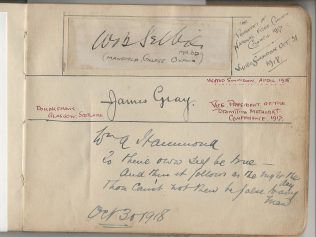 Transcription of Sketch in the Christian Messenger by F.J. Sainty

It is not a usual thing for one so young as the subject of this sketch to find a place here, for Mr. Gray  only in the twenty-eighth year of his age But if “we live in deeds, not in years,“ then our brother is not unworthy of the honour.

A native of Milngavie, Mr. Gray has lived in Pollokshaws, near Glasgow, for twenty-three years. Always religiously inclined, his first definite religious impressions were received at the meeting of the Foundry Boys‘ Society. He was converted through the instrumentality of the Salvation Army at the age of twelve, and at once began to take an active part in junior open-air work.

When about fourteen years of age, our brother joined the Primitive Methodist Society at Pollokshaws. His gifts of grace were speedily recognised, his name appeared on the plan, and by the time he was between sixteen and seventeen he was a local preacher on full plan in the Paisley Circuit, of which Pollokshaws then formed a part.

Some years ago, Mr. Gray had strong leanings towards the ministry of our Church, and the first steps towards preparation were taken. But Providence seemed to close up the way: and to indicate to our brother that he must serve Christ and the Church in other ways. Mr. Gray is satisfied that God has led him in the matter, and “He can do no wrong ” – there we rest content. And the Lord of the Vineyard has not failed to find him honourable and responsible work to do for Him, nor has He left him without signs of divine favour.

He has been a Sunday School teacher since he was a boy, and held the office of School Secretary for seven years. Two years ago, he was appointed to the leadership of the Bible Class, which met in the vestry with an average attendance of a dozen. Last year, it was found necessary to remove the class to the church, since which time the attendance has risen to over sixty. A young man himself, Mr. Gray understands the feelings and needs of young people, and God is giving him the joy of winning some of his members for Christ.

When Pollokshaws was formed into the Glasgow Third Station in 1897, our friend became Secretary of the Quarterly Meeting, a post he continues usefully to fill. For the last seven years he has been a delegate to the District Meeting, either from his Station, or from a committee, and he received the signal honour of election to the Bristol Conference when only twenty three years of age.

He has steadily grown in usefulness and in favour. The demands of a busy occupation have not allowed him to become a book-worm, but he is well-informed, and a keen faculty of observation combined with the power to meditate in the open, enables him to bring forth things new and old. There is always good sense in his public utterances, and withal constant evidence of a growing spiritual experience.

Evangelical in his creed, and evangelistic in his method and purpose, he is an admirable open-air preacher. Gifted with a clear voice, a direct style of delivery, and an earnest spirit, God has often used him in the difficult pulpit of the street or the field.

At C.E., and other gatherings of young people, he is ever welcome, and what is less common, he is an apt speaker to children. He possesses an imaginative faculty which we fancy he would well to cultivate. We have heard nothing better in its way, and nothing more likely to win the attention of a children’s meeting than his original setting of the parable of the Lost Sheep.

He has served with great and growing acceptance many of our churches in the North British District, and is esteemed for his work’s sake.

We trust that many years of service are before our friend, and that he may become increasingly useful and blessed. And may God raise up a multitude of young men and women to push forward the work of our beloved Church. For “The harvest truly is great, but the labourers are few.”

James was born was born abt 1877 at Milngavie, Stirlingshire, to parents James and Jane. James, senior, was a plasterer.