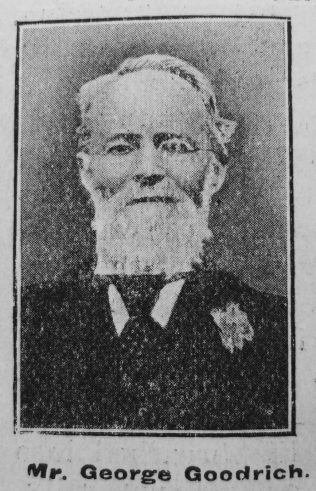 Mr. George Goodrich was born on June 6th, 1836, at Epworth, Lincolnshire, in a house that was situated opposite to the famous home of the Wesley family.  His parents were strict adherents of the Established Church; respectable in character, but unfavourable to Nonconformity. In his childhood, therefore, the probability seemed to be that his association with Methodism would be limited to the accident of his birth in a historic neighbourhood. At the age of fifteen, however, he was apprenticed to a tailor in Hull, and, shortly after going to live there, found his way to our then newly-erected Great Thornton Street Chapel, when, one Sunday evening in 1831, he was converted. Young as he was, and notwithstanding adverse influences and surroundings, the religious choice he then made proved to be decisive and lasting. This was doubtless due on the human side, to his class leader, who took a kind and deep interest in the lad, whose circumstances he knew, and to this early friend Mr. Goodrich ever looked back with gratitude. During the period of our friend’s membership in the Hull Circuit, the late Dr. Joseph Wood commenced there the ministry that grew to be of so much power and usefulness.

When not quite eighteen years of age, our departed friend came to Sheffield, and joined the Bethel Society. The Sheffield Circuit was then experiencing a high tide of prosperity, under the superintendency of the Rev. John Brownson. Within six months of uniting himself with the Bethel Society, Brother Goodrich was placed on the preacher’s plan. He also became the assistant leader of the late Mr. John Law. He participated in the successful mission work out of which grew the Stanley Street Society and the Sheffield Second Circuit, with the Petre Street and other circuits formed from it. He was also personally instrumental in missioning the village of Dore, where we have now an excellent property and a good society. For two years he went to Dore every Sunday, taking his food with him and eating it under hedges, until homes were opened and a society founded. His name was fragrant in that society. “At this time,” – his manuscript notes say respecting those earlier aggressive days, – “we used to covenant with God for fifty and a hundred souls to be saved during the quarter.” From such high seasons of spiritual communion, these devoted men went forth to their triumphant and fruitful labour.

As a preacher, Mr. Goodrich was intelligent, thoughtful, impressive, and successful. He had more than natural ability, and this he developed by faithfully putting into his work his best of gift and soul and preparation. It is said that the note of hope and confident expectation rang in his utterances. The spirit in which he addressed himself to his work may be gathered from his notes of a day’s service at Walkley many years ago. He says: “After converse with several of the friends about the necessity of united effort to secure a revival of the work of God, we separated under a sense of the Divine favour.” This is the language of the evangelist. Local preachers who serve the churches thus render themselves invaluable.

The late Rev. John Gair, an old friend, writes of “our dear departed friend,” and expresses the anticipation that his life story “may be the means of doing great good to a large circle of friends.” It had been Mr. Gair’s intention to supply a considerable amount of matter for the present biographical notice: an intention only frustrated, unhappily, by his own fatal illness.

Mr. Goodrich’s later years were spent in the Sheffield Ninth Circuit. He attended the Abbeydale Church, near to which he resided, and at the time of his death, held the offices of local preacher, class leader and chapel steward, His life was marked by not a little trial and vicissitude, and his last illness was lingering and painful. Through all, however, he “held fast the beginning of his confidences.” Not long before the end, he said to his son, “I’m going home, my boy. Home! Home! Glory! Hallelujah! Praise the Lord! Jesus, I love thy charming Name. This is real! Stick to it! The Lord has brought me through many a conflict, and now, with eternity in view, I am more than conqueror. Blessed be God! It’s victory!”

He died on Aug. 13th, 1903, and was interred by the writer, assisted by the Rev. W. Cutts. Mr. Cutts also preached his funeral sermon in the Abbeydale Church on September 6th, and alluded to the useful life of the deceased, as known by himself during many years. He leaves a widow, whose membership has been as lengthened and whose devotion has been as conspicuous as his own, and several sons and daughters, a number of whom are in useful connection with our Sheffield Churches.

George was born to parents Thomas, a gardener, and Mary.