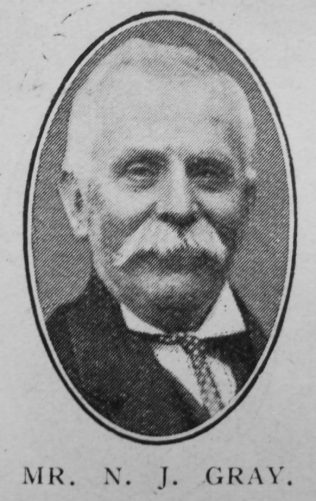 With deep regret we record the death of Brother N. J. Gray, local preacher, class leader and trustee of Wednesday Market Church, Beverley, at the age of 53 years. He was the living embodiment of the teachings of Jesus. No one questioned the whole-hearted piety of Brother Gray. He went about doing good, and all who knew him felt the influence of his Christly spirit.

Born at North Cave, when quite a youth he was converted in a class meeting. In early manhood he removed to Brigg Circuit. His Christian zeal, his real earnestness in singing and prayer, were soon recognised, and 31 years ago he became a local preacher. In 1888 he and his family removed to Beverley, and a few years later he commenced in the grocery. trade, and soon acquired an extensive business.

Brother Gray was a Christian at all times and in every place, and secured the confidence of a large circle of friends. For many miles round he was known as the friend of the poor, and the counsellor of the distressed.

For some time his health was not all he desired, but no one suspected that his end was so near. He had a vigorous constitution, was a staunch total abstainer, and we all expected him to recover. Divine wisdom decreed otherwise, and on Wednesday, November 24th, 1909, early in the afternoon, very suddenly, he passed away. The funeral on the Saturday was one of the largest seen in Beverley. The services were conducted by Revs. J.A. Taylor and P.W.B. Oliver, a most appropriate and impressive address being given by the Rev. Frederick Ash, of Hornsea. A memorial service was held in Wednesday Market Church, Sunday, December 5th, conducted by the Rev. J.A. Taylor.

Bro. Gray leaves behind Mrs. Gray, three sons and two daughters, all valued members and helpers of our Church.

Nathan was born in 1855 at North Cave, Yorkshire, to parents Elisha Gray, who worked the land (1861), and Hannah Easingwood.