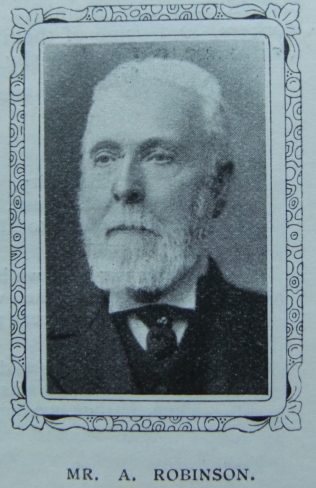 A man of God; a hard worker; a true Primitive Methodist are phrases which accurately describe Mr. Alfred Robinson of the Grimsby First Circuit. Converted in the year 1848, he joined the Church and has since maintained an unbroken membership. With the exception of a year or two he has been connected with our Victoria Street society, where to-day his spiritual influence and wise counsels are most highly valued.

Few men have a more worthy record. In addition to serving as Grimsby town missionary for a time, society steward for twenty years, class leader for a still longer period, he can look back to fifty-three years as a local preacher. Taking one year as typical of many, he preached sixty times and walked close on a thousand miles. Being much blessed by the movement for the promotion of Scriptural holiness, the doctrine of entire sanctification has always been a distinct note in his message. He thoroughly prepares for his work, and stands for the blend of intellectual equipment with spiritual fervour. Though having great faith in the assistance of the Holy Spirit, he reverently believes that the Holy Spirit Himself is assisted when due preparation for the pulpit is made.

Again and again under his ministry decisions for Christ have been made. The temperance and missionary causes have always had his practical support. Only a few weeks ago he occupied our missionary chair for the tenth successive year.

Though now in his 74th year he is still serving our Church with unabated spiritual passion.

Alfred married Ann Bowers (abt 1833-1861) in the spring of 1856 at Grimsby, Lincolnshire. Census returns identify one child.