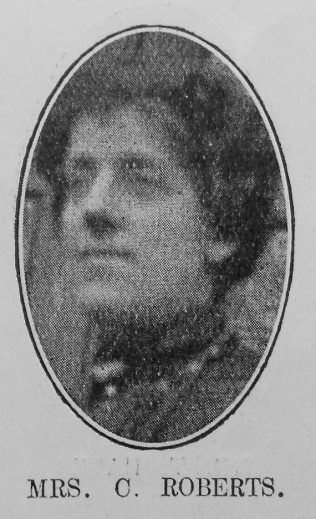 Clara. Roberts (Mrs.), of Chiswick, who passed away on January 25th, 1909, aged fifty-two years, was converted in February, 1905, and from that time old things passed away, all things became new. Her constant question. was, What can I do? Is there anything I can possibly undertake?

Being a widow, residing in her own house, but needing to go out to provide means for her support, she devoted whatever time she had at her disposal in seeking the good of her neighbours. At the Sabbath services you could count upon her cheering helpful presence well to the front in the congregation. At the week-night service she would be present unless engagements of necessary toil hindered her.

Though not of robust, health by any means, no weather daunted her. In the open-air, though as she said she was no singer nor speaker, she was there to give what support she could and to whip up some others who needed it.

Though her means were slender she knew how to give till she felt it. She has, when counselled not to tax herself so much, said, “Oh, if you knew how I love to give you would not grudge me the joy.”

The first Sunday morning after her conversion, there was found in the collection a piece of paper folded together containing these words and one pound in gold: “A thank offering to God for converting my soul,” no name being attached, but one of the stewards knew her handwriting.

She loved to do good by stealth. Tract distribution, sick visitation, she cheerfully undertook.

In September, 1908, she had to undergo a minor operation, which it was hoped would be effective, but in January of this year it was found necessary to further operate, but alas, she had not sufficient strength to carry her through, and peacefully passed away in the early morning of January 25th. She crowded into the space of four years work that was the cause of wonder and admiration to all who knew, her. She was much loved and is much missed.

Clara was born in late 1856 at Adstock, Buckinghamshire, to parents David White, who worked the land, and Ann Clark.

Before her marriage Clara worked as a domestic servant.