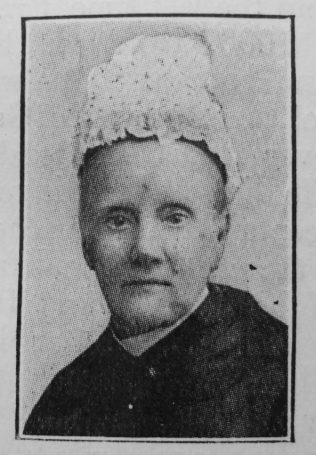 Jane Roberts, relict of the Rev. Thomas Roberts, was the daughter of Mr. John Jones, of Buxton. Her father’s home was always open to the ministers and local preachers of our Connexion and the influence of these men of God was early seen in the life of our sister. She was converted when quite a girl, and at once commenced in the active service of God.

Her husband found in her a real helpmeet. Their early ministry was in the trying days of our Church and they had many hardships to endure. Mrs. Roberts bravely assisted her husband in his work, and in so practical a way that when he was prevented by illness from taking his duties she would lead the class and also the service and preach a living gospel to the people.

Mr. and Mrs. Roberts were very enterprising. They undertook the enlargement of Curzon Street Chapel, Leicester. They built the new schools and raised over £800 of the cost. Mrs. Roberts was most deeply interested in our Church and Sunday School and supported the funds of both most generously as long as she was able. Our sister was a most beautiful character, and dearly beloved by all who knew her. Her brightness, cheerfulness and generosity endeared her to all. Her spirituality was marked. She lived a life of prayer, faith, and trust in God.

For the last two years of her life she was very feeble in health but her faith never wavered, and when the call came she was ready, and passed peacefully from the service of earth to the higher and more glorious service of heaven.

Jane was baptised on 17 December 1819 at Buxton, Derbyshire. Her parents were John, a sadler, and Jane. The baptism record gives her birth date as 13 December 1819.

She died on 4 January 1907 at Leicester, Leicestershire.