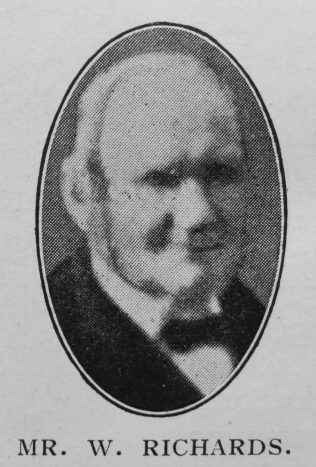 Transcription of obituary published in the Primitive Methodist Magazine by T. Phelps

Many experienced a deep feeling of loss when they heard of the decease of Mr. W. Richards, of Droseford (Droxford)Circuit, May 15th, 1910, aged 71 years. Soundly converted in youth, at once he made full surrender and consecration to Christ and the Church, and gave up tobacco, intoxicating drink, and everything that was doubtful in relation to the Christian life, and became the sunniest, happiest, and most inspiring Christian we have ever known. Generous-hearted, he was ever ready liberally to support the Church, and give freely to those in need.

For nearly fifty years he was a very popular and successful local preacher, and saw much people added to the Church, and many despairing troubled souls inspired and enthused with fresh courage by his boundless Christian optimism. He was an enthusiastic Temperance worker, and loyal Free Churchman, and now after fifty years’ strenuous service he has passed into “the rest that remaineth to the people of God.” The crowded congregation at the funeral service, conducted by Revs. J. Leach and T. Phelps, testified to the esteem in which he was held. The present writer will never forget his constant sympathy, hearty co-operation, and loving fellowship. The sorrowing wife and family may rest assured of the deepest sympathy of the large company who feel they have lost their  best earthly friend.

William died on 15 May 1910 at Shedfield, Hampshire