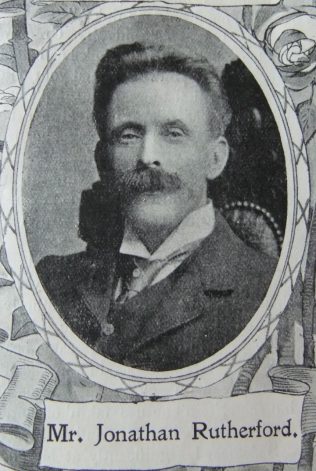 Born at Nenthead, September 26th, 1856, Mr. Rutherford has never lived anywhere else. Converted in 1876 he has always been a true Primitive. As local preacher he has served his own and neighbouring dales for over thirty years. He has taken great interest in bringing out young men for the plan. His own son, who died suddenly in September last at the age of twenty-five, had been a preacher for nine years. As Sabbath School teacher for thirty years, secretary to the Trust eighteen years, and senior steward for Alston Circuit, Mr. Rutherford proves himself a worthy son of his church. In all his work he is supported by a devoted wife and family. He was a member of Alston School Board from its formation till its destruction by the Balfour Act, and is now one of the school managers. He is Chairman of the Parish Council, and of the Liberal Association.

Jonathan was born at Nenthead, Cumberland to parents William and Jane. William was a lead ore miner.

Jonathan earned his living as a joiner.