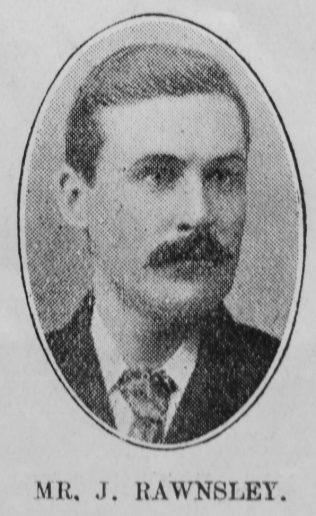 Transcription of Obituary published in the Primitive Methodist Magazine by J. Maland

Brother Rawnsley was a great-hearted, lovable man, bearing a character irreproachable. His religion was delightfully natural and buoyant, adding much to his own happiness and that of others. The notes of his life were sincerity, earnestness, unselfish devotion seen alike in his daily calling and in his manifold services for his church.

For over twenty-five years he was honourably associated with our New Hey Road Church, Bradford, filling with marked efficiency the posts of Sunday School teacher and superintendent, Trust treasurer, and Society steward. He was rarely absent from his duty, more than once or twice has he been known to return from his few days’ holiday for his church duties on the Sabbath.

His testimonies of prayer, praise, and deep spiritual experience will long be remembered and his great liberality to all the claims of our church is beyond all praise. His unostentatious piety, abundant service and manly simplicity won the admiration of all; and one of his last acts, with a meagre income and failing health, was to give a handsome donation to the Centenary Fund, with a rare spirit of sacrifice, cutting off legitimate expenditure in another direction in order that he might assist the thanksgiving celebration.

The clouds gathered thickly during the closing months of his life. A little over twelve months ago he met with an accident, from which he seemed to have recovered, but illness returned and he was unable to follow his employment, the affliction being the keener because his beloved wife was stricken with an incurable malady, but amid all the Light never failed, he remained patient, hopeful, truly courageous.

The end came with comparative suddenness on the morning of April 14th. We interred the earthly casket on April 17th, the Rev. Joseph Maland conducting a largely attended service in our church and the Rev. G. Ayre giving a tenderly appreciative address, and on Sunday evening, April 25th, the writer preached to an excellent congregation from Genesis v. 24, bearing affectionate tribute to his memory and immense worth.

Joseph was born abt1862 at Windhill, Shipley, Yorkshire. I have not been able to identify Joseph’s parents in online records.

He married Sarah Pengilly (1861-1910) in late 1888 in the Bradford Registration District, Yorkshire.