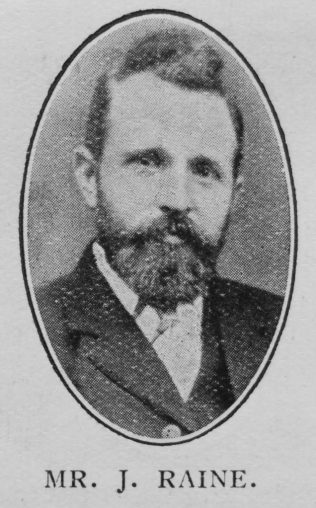 Transcription of obituary published in the Primitive Methodist Magazine by J.P.R.

Joseph Raine was born at Toft Hill in the St. Helen’s Auckland Circuit, where he resided all his life-time. His father, Joseph Raine, of cherished memory, one of the oldest class leaders, was strongly solicitous that his family should be trained in the Sunday School, and should early become identified with the Church. His desire was happily fulfilled. At the age of fifteen—with a companion, the late Moses Burnip—Joseph gave himself to God, under an ardent appeal by Thomas Davison, of the Shildon Circuit.

Starting at the age of nineteen years, he laboured with much success as a local preacher for thirty-three years, travelling. many miles in his own and adjacent Circuits, witnessing many stirring scenes and wonderful conversions in the course of those eventful years. An earnest worker in the Sunday School, he rose to become superintendent for some time, and at the death of his venerable father succeeded him as class leader, discharging the duties of the position with zeal for a period of twenty years until the close of his earthly career.

Earnest and vivacious, ready in conversation, vigorous in debate, fearless and outspoken, but  withal kindly, generous and magnanimous, he impressed himself upon the life of the church and neighbourhood. After a painful illness of a few months’ duration, he passed away on February 5th, 1900.

Hosts of brethren and friends, on a keen snowy day, attended his funeral, conducted in our church by Revs. J. Phillips Read and J.W. Middlemiss, Circuit Ministers; Messrs. H.J. Mein and D. Carrick, Circuit Stewards; and the veteran Mr. Thomas Davison, under whom our friend was converted.

Brother Raine has left a wife, faithful and devoted; a son, Sydney, who is the organist of our Toft Hill Church; an aged mother, a life long member of the Church, still by the blessing of God hearty and vigorous; a sister, the wife of Mr. Joseph Atkinson; and three worthy and honoured brothers:—William (of Wallsend, in the North Shields Circuit), Bryan, superintendent of the Sunday School, and John George, secretary to the Trust. May all meet in the morning of some bright morrow when we shall indeed be “At Home with God.”

Joseph was born in the summer of 1856 at Toft Hill, Co. Durham, to parents Joseph Raine, a carter and farmer (1861) and Jane Hodgson.

He married Jane Forster (abt1857-1928) in early 1879 in the Auckland Registration District, Co. Durham. Census returns identify one child.