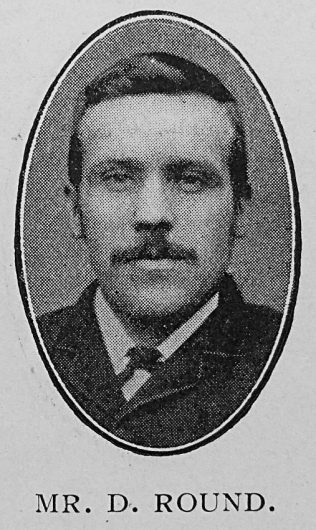 Brother Daniel Round, of Leighswood Oldridge, on the Lichfield Circuit, met with a serious accident at the colliery and passed away on July 5th at Walsall Infirmary. Bro. Round was forty-nine years of age, and for upwards of twenty-six years he has been connected with us and has fulfilled his duty as Local Preacher, Sunday School teacher and President of the Christian Endeavour. For many years he was connected with our Walsall Wood Society and until the last retained a warm interest in that church. He inaugurated the C.E. Movement at Leighswood, and to-day there is a strong and vigorous society.

His desire was ever towards the young people, and his delight was to see them joining heartily in public prayer and showing signs of personal and vital Christian experience. By many he was known as “Smiling Dan,” for even under clouds of trouble he came to his appointments with a smiling face. As conductor of the choir he rendered good service, and delighted in singing the good old-fashioned hymns. One could not wish for a more regular and attentive hearer at preaching services. He lived much on the bread broken at the Lord’s table.

The interment took place at Aldridge, the service being conducted by the Rev. W.C. Ball. The prayers and sympathy of a large circle of friends go out to his widow and family.

Daniel was born abt1862 at KIngswinford, Staffordshire, to parents George Round, a labourer (1871), and Matilda Smith.