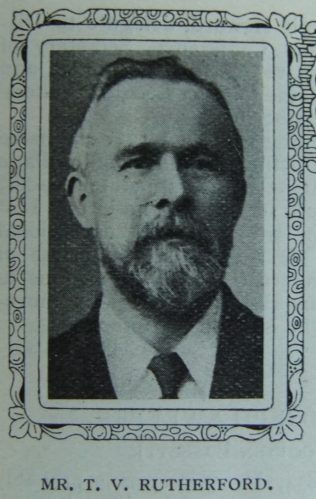 Born at Berwick-on-Tweed in 1856, Mr. T.V. Rutherford enjoys the distinction of being a freemen of that city. He was first brought into connection with Primitive Methodism at Sacriston in the Durham Circuit where, when eighteen years of age, under the ministry of the late Rev. John Taylor, he was led to surrender his life to Christ. With characteristic ardour he at once threw himself into the work of the Church and Sunday School. He became a local preacher in 1876, and in that capacity made full proof of his ministry. He took a prominent part in missioning several colliery villages where strong causes were soon raised up. Conversions were usual under his preaching, and at one service no less than twenty-two sought and found the Saviour. In 1878 he removed to Dover, and for two years served our churches well in that locality, after which he returned to the North and settled in Carlisle. His twenty-six years association with Cecil Street have been years of strenuous service. He has from the first been a teacher in the Sunday school and was for some time its Superintendent. As a local preacher he is always welcome, and has been known to walk nearly thirty miles to preach three times on a Sunday. He is at present junior station steward, and a trustee for each chapel in the Circuit. His interests have by no means been confined to his own Circuit. For a quarter of a century he has been on the District Committee; several times he has been a delegate at district meeting, and twice at Conference. While broad-minded and Catholic he is emphatically a Primitive Methodist, intensely jealous for the honour of his Church. He has given a son to our ministry –W.G. Rutherford, of Rotherham – and all his family are thoroughly loyal. His cheerful spirit and racy style make him a popular chairman and platform speaker. Among his neighbours his genial disposition, high character, and sympathetic nature have won for him the highest respect and esteem.

Thomas was born abt 1856 at Berwick-upon-Tweed, Northumberland, to parents Thomas and Margaret. Thomas, senior, was a butcher.

Thomas was baptised on 16 March 1856 at Berwick-upon-Tweed.

Thomas died in the summer of 1921 at Carlisle, Cumberland.