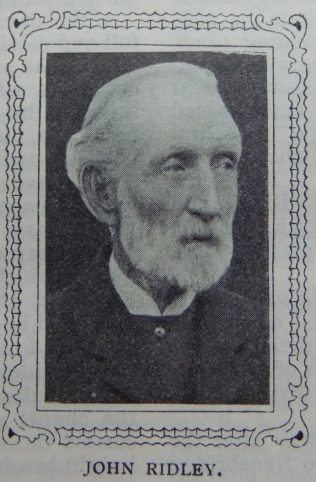 John Ridley was born at Corbridge-on-Tyne in 1836. When nineteen years of age he removed to Henshaw, in the Haltwhistle Circuit, where he is now regarded as the father of our Society. To him belongs the credit of commencing the first Sunday school in the village of Henshaw, and although he is no longer able to work in connection with the school he is ably represented by a son and son-in-law. It is thirty-five years ago since he was appointed Society Steward, and in that capacity he still serves the church. In recent years he has not been able to attend the services during the winter months owing to indifferent health, but his interest is not less great on that account. He arranges and plans at home, so that the work goes on without any hitch.

Henshaw Society is noted for its loyalty to all Circuit and Connexional movements, and its generosity is known to all. No small part of the credit of this is due to the tactful administration of the Society Steward. He is a modern Enoch. He walks with God. We cannot claim for him any Connexional honours. He has never sought them. He is modest and of retiring disposition. Tradition says he once attended the Circuit Quarterly Meeting, but whether this is so or not, the present writer is unable to say. It would certainly be an extra-ordinary event if he were to put in an appearance at such a meeting. But if he is not present in person, he always sees that the Society report and contribution are there. His house is the preachers’ home. For fifty years he has given generous hospitality to all who came. The Annual Camp Meeting is a great day with him. He is a happy man as he sits at the head of the table where every preacher planned for that day is expected to be present to share his hospitality. This is an old rule, and no one would dream of violating it. For many years he had the co-operation of a generous hearted partner, but she was called home, and now he is assisted by his daughters.

John was born in 1836 at Corbridge-on-Tyne, Northumberland, to parents Thomas Ridley and Mary Ann Hall. He was baptised on 17 July 1836. Thomas was a shoemaker and baker (1851).