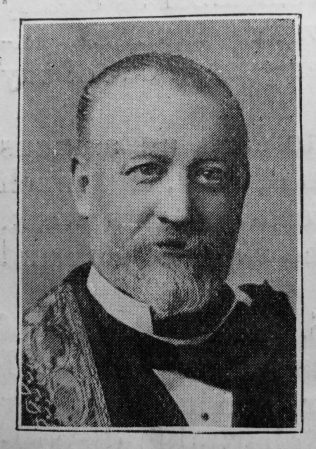 Transcription of Obituary in the Primitive Methodist Magazine by John P. Bellingham

Mount Tabor Church, in the Cardiff Second Circuit, has suffered great loss by the death of Councillor Joseph Ramsdale, J.P. Mr. Ramsdale was born at Warrington, Lancashire, in the year 1842. He removed to Stockport, and became an agent of the Prudential Assurance Company. He was appointed to Hereford, and in 1869 became a member of the Primitive Methodist Connexion in that city, and an active local preacher. He made rapid progress in the work of Assurance, and soon gained promotion. In 1871 he was appointed Superintendent of Cardiff, Gloucester, Bristol, Bath, Exeter, and South Wales. At that time we had only a mission station in Cardiff, it was small and poor, the quarterly income of the mission did not average £9. He became identified with the work of the mission and continued an earnest worker till death ended his-toil on the morning of April 2nd, 1906.

He began to fail physically some months before the end came, but he toiled on until he suddenly failed and became unconscious; and at his home, in the midst of his family, he. peacefully passed away. For thirty-five years he and his good wife worked in Cardiff for the good of Primitive Methodism.

Like other men he had his defects, but good qualities covered his imperfections.

His early efforts on the Cardiff Mission were very successful. Aided by Mr. William Gardner, a local preacher of many years’ standing, he gathered hundreds of children to the Mount Tabor Sunday School, when the church was first opened. Mr. Ramsdale was connected with the school at the time of his decease. His sympathy with the teachers was shown in an annual treat at his expense. He also gave the scholars an annual treat at Christmas time in the schoolroom.

He was a liberal circuit steward. In 1880 the quarterly income of the Cardiff station was insufficient to meet the expenditure without aid from the Missionary Committee. He consented to become the circuit steward on the condition that the superintendent kept the circuit book. He would simply see that the salaries of the ministers were paid. In 1891 there was agitation in the circuit and it was divided. The second circuit was feeble, but the steward kept his word and paid the deficiencies.

He was a popular man in the city corporation. In 1878 he was elected a guardian of the poor for the Parish of Roath. In 1883 he was elected by a large majority to represent the Roath Ward, on the Cardiff Corporation. In 1897 he was chosen Mayor of Cardiff, and so well did he discharge his duties that the Corporation presented him with an illuminated address and congratulated him on his impartial conduct as chief magistrate of Cardiff. An alderman for eight years, he was chairman of the Public Works Committee, and also held other important appointments.

His life was marked by Christian beneficence. He believed in proportionate giving to God’s cause. Many were the demands made upon him as a public man by the churches of Cardiff. There are about seventy free churches in the city and as many ministers. Cardiff second circuit alone will suffer the loss of more than £100 a year, from his ordinary contributions.

The funeral service was conducted by the minister of the circuit, in Mount Tabor Church, which was greatly crowded. The Rev. W. Carrier and the Rev. E. Ball took part in the service. The address was given by the writer. The expression of respect and sympathy shown by the City Corporation and other public bodies was remarkabie. After the service in the church, the great procession, with the ministers in front, was conducted by mounted police. The way to the cemetery for over a mile was greatly crowded by sympathetic friends. Our brother has left an afflicted widow and four sons and four daughters. May they all find great consolation in the love of God.

He married Elizabeth Heywood (1842-1906) in the spring of 1865 at Stockport, Cheshire. Census returns identify nine children.