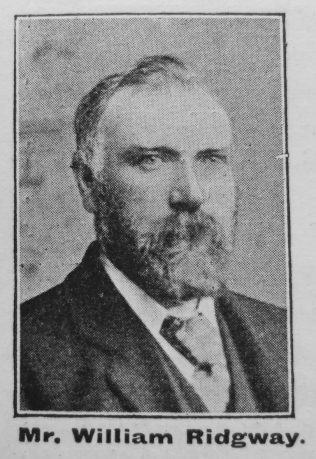 Transcription of Obituary in the Primitive Methodist Magazine by Albert A. Birchenough

By the unexpected death of Mr. William Ridgway, Wem Circuit and Church  have lost one of their most devoted officials and willing workers. Deceased was a native of Sound Heath in the county of Chester. His parents and relatives being prominently connected with Primitive Methodism in the Nantwich Circuit, he was environed in youth by religious influences. In his early manhood he yielded himself to the claims of Christ, and ultimately became a stalwart follower of Jesus. At the Tunstall District Meeting held at Crewe in 1879, he received a greater baptism of the Holy Spirit, and entered into a fuller consecration to the Master’s service. In writing to his wife a description of his enlarged experience, he stated “that Crewe seemed full of glory” during the District Synod Sabbath. With renewed zeal, and his soul all on flame with ardent desire, he began to labour for Christ and His Church as he had never done before. At the time of his death Mr. Ridgway held the important offices of Circuit secretary and also secretary of the Wem Circuit Sunday School Union Committee. He was a trustee, church steward and treasurer of the Wem Sabbath school funds. For over twenty-five years he had been organist and had rendered valuable service in harmony and praise. He was a member of the Shrewsbury District committees, and had represented his circuit at the District Synod held at Ellesmere. All his engagements in the Church were discharged in a thorough business-like manner and were performed in a Christian spirit. As an official he was reliable, courteous, brotherly and prompt.

His attachment to the House of God was intense. Although he was a busy man, and was successfully developing an extensive grocery and confectionery business, he was most regular in his attendance at the week-night preaching services, and greatly helped God’s ministering servants by his cheery presence, his appreciative attention, and his fervent responses. He was a great lover of the companionship of good men, with whom he delighted to converse on the deep things of God.

His death took place on July 14, 1903, at the comparatively early age of fifty-four years. His illness was occasioned during the month of June, while performing his duties as circuit secretary. Driving through a pelting storm of rain to attend a circuit committee held in a country chapel, resulted in a severe chill which rapidly developed into influenza, followed by complications. During his brief but heavy affliction he manifested considerable patience. He trusted in the Divine promises, and leaned upon the strong arm of a covenant-keeping Jehovah. As he entered the valley of the shadow he gave evidence that he was going to be with those who “serve Him day and night in His temple.”

The funeral was one of the largest that has been witnessed in the old Salopian town of Wem. It was largely attended by representatives from the town churches, the Wem Free Church Council, the Good Templars, and the Rechabites’ Society (of which he had been a member and had rendered valuable service), and also by the local preachers and officials from his home and neighbouring circuits. The services in the church where he had worshipped and at the graveside were most impressive. The Revs. J. Cooper, Albert A. Birchenough and George Lee took part. Numerous marks of respect were manifested by his fellow-townsmen, who had been greatly impressed by his unvarying goodness and strict commercial uprightness.

Deceased leaves a widow, son and two daughters. Their sorrow has been brightened by the messages of sympathy from former ministers of the Wem Circuit, and the resolutions of condolence from the District committees. A crowded “In Memoriam” service was held in the Wem Church, and was conducted by the resident minister. The bereaved family look through their tears to a reunion in the Father’s house of many mansions, where sorrow and death are unknown.

William’s birth was registered in the last quarter of 1848. The 1851 and 1861 census returns identify him living with grandparents at Sound. I have not been able to identify his parents.