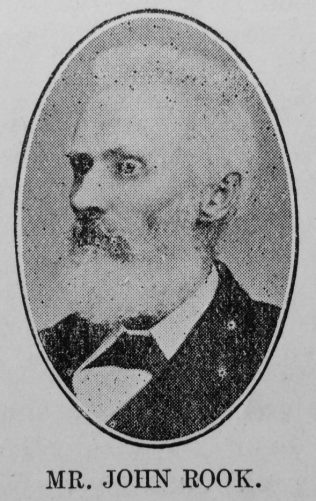 Transcription of Obituary published in the Primitive Methodist Magazine by J.G. Cushing

Maryport Church and Circuit has sustained a real loss through. the death, on Wednesday, September 23rd, 1908, of Brother John Rook. He was born at Aspatria (CumberJand), July 19th, 1833. Nearly fifty years ago he was brought into saving acquaintance with Jesus Christ, and immediately began to serve his Lord and Master. To the time of his death he remained a consistent Christian, widely respected, and in truth really loved.

As a local preacher in his early years he frequently travelled twenty miles on foot to his appointments, returning home at two a.m., and would then reach his work, two miles distant, at six am. At one place, twenty miles away, a gentleman so appreciated his labours that he insisted on giving him his day’s wages rather than he should go to work on Monday after his forty miles’ journey, etc.

As a preacher he was a successful soul-winner. His fine presence, musical voice, bright happy countenance, together with his piety and manliness, won him a respectful hearing and full appreciation. He was also a class leader, and for many years circuit steward. His generosity toward religious and other objects might always be relied upon.

Returning home after an absence of some three months, apparently in better health than for some time past, Mr. Rook took part in the Sunday and Monday meetings. On the Wednesday morning following he went out for a short walk, and sat down at home for lunch; then without any warning, expired. His death was a great shock to many friends, but for him it was the gentle passing to his Father’s house.

The funeral services were attended by a great number of people, and were conducted by the Revs. R. Crewdson (Stockport), and J.G. Cushing. The widow and several children have been much comforted by letters from various friends, including those from Revs. P. Norman Kennedy (Church of England), J. Burton (Laxey), W. Spivey (Colne), and Mr. T. Greenhow (Circuit Steward). The superintendent. minister conducted an “In Memoriam” service on Sunday evening, October 11th, which was largely attended.

They additionally brought up an adopted daughter, Sarah Ann Graham (b abt 1864).