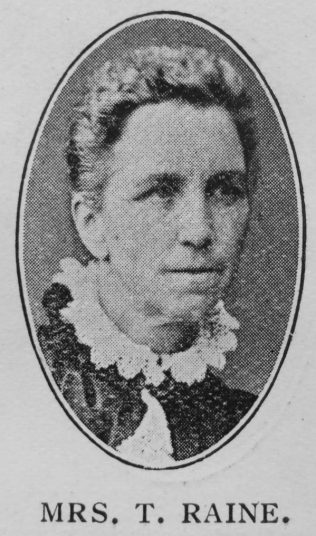 Transcription of obituary published in the Primitive Methodist Magazine by E.B.S.

Mrs. Thomas Raine, who died at Derwent View, Castleside, on March 29th, was a Weardale woman, born at Wearhead. A Primitive Methodist by birth, she was always connected with our Sunday School and interested in our work; but her conversion took place under Rev. Andrew Latimer.

In 1883 she was married in the old Wood Street Church at Shotley Bridge to Mr. Thomas Raine, and their home has ever since been hospitably open to all messengers of God. Mrs. Raine took a leading part amongst the women of the Church and Circuit in organising and working for bazaars and other efforts for raising money for our work. She was warmly interested in everything pertaining to Primitive Methodism. When the Women’s Missionary Auxiliary was formed in the Circuit, she was one of its keenest supporters, and was elected a Vice-President; and it was a great disappointment to her that, after assisting to make all the arrangements for welcoming the visit of the Auxiliary to Castleside, she was taken ill and could not be present at the meeting and tea. She rallied from that illness and appeared to be almost restored to her usual state of health when a sudden heart-seizure completely prostrated her and proved fatal in a few hours.

Warm sympathy has been expressed on all hands with Mr. Raine, one of the staunchest and most respected veterans of this great Circuit. Mrs. Raine was a queen of the home—a good, kind, warm-hearted woman, and a sincere Christian. Appreciative and sympathetic letters were received from several ministers who travelled this Circuit, some of whom had known her from childhood. The funeral ceremony was conducted by the writer, who paid a high tribute to the personal worth and service of the deceased.

Jane was born abt1850 at Wearhead, Co. Durham, to parents John, a lead miner, and Elizabeth.