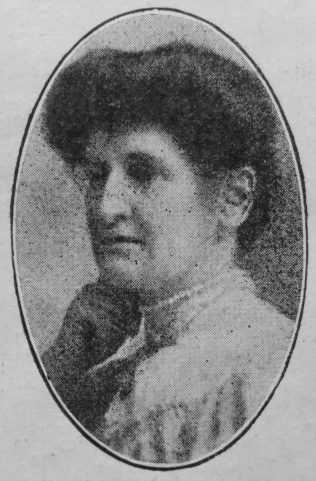 Transcription of obituary published in the Primitive Methodist Magazine by W.R.H.

Mrs. Joseph Rutherford was born in the year 1868 at Hawksteel, in Allendale, and originally belonged to the Wesleyan Church. In 1894 she was married to Joseph Rutherford, who, nine years later, was accepted into our ministry. All who knew Mr. and Mrs. Rutherford anticipated for them a long and successful ministry. To the dismay of all their friends that prospect was suddenly dimmed by the sudden death of Mrs. Rutherford, December 4th, 1907, after an illness in which she suffered great pain with patience and fortitude.

She was interred in Heaton Cemetery on Friday, December 6th. At the service held in the cemetery chapel many friends gathered to pay tribute to one held in high esteem and affection and to sympathise with her sorrowing husband, the extent of whose loss no one can fully realise.

Mrs. Rutherford possessed many noble qualities of mind and heart, Naturally frank and sincere she attracted all. Her judgments of life and character were singularly clear, and many were drawn to repose trust in her. Deeply spiritual, she possessed an alertness and depth of character which made her a true helpmeet to her husband in his ministerial labours. But it was in the home that Mrs. Rutherford was seen to most advantage; it was her constant endeavour to make it a source of comfort and light. How difficult it is for us to realise that her work was complete.

In her many have lost a true friend; many more a faithful companion; the church to which she was devoted, a faithful worker; and our brother, a wife whose strong brave companionship and wise, tender fellowship, made his work light and his home a treasure and a joy. We pray for him without ceasing, knowing in a measure the sharpen and depth of his great loss.

Mary was born abt1864 at Hawksteel, Allendale, Northumberland, to parents William, a farmer, and Mary.

She married Joseph Rutherford (1866-1935) in early 1894 in the Hexham Registration district, Northumberland. Joseph was a clerk in a metal foundry at the time of the 1901 census and entered the PM ministry in 1903. They did not have any children.

Mary died on 4 December 1907 at Newcastle upon Tyne, Northumberland.

Note: Records identify that Mary was born abt1864, not 1868 at stated in the obituary.