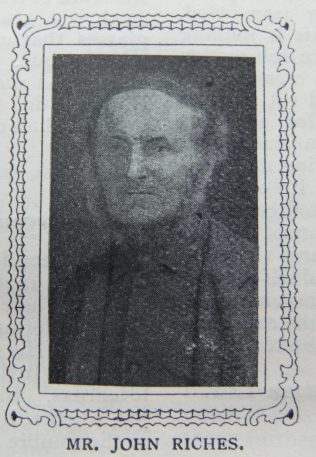 John Riches, of Milcham, like Elisha the prophet, is a man of the plough, and among the fathers of our Israel takes no inconspicuous place. Born in 1824, he attended school till seven years of age, when he was sent crow-scaring for 1s. 6d. per week to aid his parents in their struggle with poverty. From this point he rose step by step to his coveted position, and became a proud follower of the plough, in which work he excelled soon, winning in open competition the first prize in his class.

Converted at the age of twenty-three, he sedulously applied himself to reading and Christian work, but not without great difficulty and keen persecution. “John,” said his young wife, “if you go preaching about the village I’ll lock you out.” This she did, also declaring that no preacher should have a meal in her house. Soon, however, old things passed away, and, at a prayer-meeting conducted by her husband in the home, she cried for mercy and found peace. For fifty years there has been the prophets’ room in this humble cottage whose tenants gladly sacrificed personal comforts for the servants of God.

As a preacher our brother was intelligent, acceptable, and successful, cottage after cottage being the scene of gracious revival, largely through his ministrations. Thus the cause as Milcham was established. His theological examination took place in a blacksmith’s shoeing-shed, and he delights to testify of the visit of Hugh Bourne, who preached in a carpenter’s shop, which long served as a meeting-place.

The present neat little chapel speaks eloquently of the generosity and self-denying labours of Mr. and Mrs. Riches, the former having a record of fifty-seven years’ membership – fifty-five as a local preacher, fifty as class-leader, and forty-nine as society steward. His loyalty to our church, devotion to duty, his constancy, humility and Christliness of character, endear him to the Swaffham Circuit, which, at the ripe old age of eighty-three years, he is still serving, calmly awaiting in life’s eventide the dawning of the eternal day.

Census returns identify that John worked the land. In 1901 John and his wife were receiving parish relief. The 1911 census shows John living with his daughter Ann in Wimbledon, Surrey.