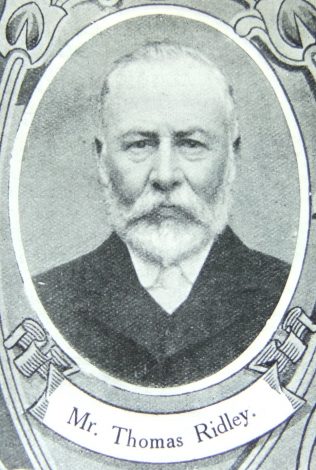 Mr. Thomas Ridley, the courteous and capable Steward of the Haltwhistle Circuit, is a man who inspires respect. He is in a noble succession. Joseph Ball and John Maxwell dignified the office by the way they discharged its duties. It is no small praise to say that the present occupant is a worthy successor to the above-named brethren. Born at Corbridge-on-Tyne, he removed to Henshaw in this Circuit when in his teens. Converted in the Henshaw Chapel when 17 years of age, he became a local preacher in the following year, and for some 40 years he has faithfully served the church in that capacity. He has a fine record of work behind him, and is still in “labours abundant.” To him church work is a pleasure. He never serves with a frown. He gives of his best, and he gives it cheerfully. He has learned the art of taking pains, and all his work is characterised by thoroughness.

Thomas was born on 10 December 1851 at Corbridge, Northumberland to mother, Jane.

Thomas worked as a tailor for most of his life, but the 1911 census records him as a school attendance officer.