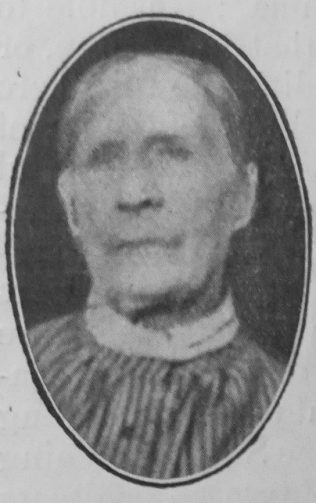 Transcription of obituary published in the Primitive Methodist Magazine by H.M.H.

Mrs. Hannah Rosier served our church at Bagshot in the Hungerford Circuit with exemplary patience and thoroughness. For many years she was the mother of the church, caring for its interests with loving vigilance.

It is not an extravagance of eulogy to say that had it not been for her faith, labour, and courage, the little wayside church in which our Bagshot people worship would never have been erected. After the completion of the building she continued to work most industriously to liquidate its debt, and had the pleasure of seeing it unencumbered some time before her death.

She most faithfully honoured the duties of society steward for many years. Her love for the church made her office a sacred trust. Nothing she could do to further the interests of the cause was refused or performed grudgingly or carelessly.

Her religious life was very happy and very sincere. Her faith in God brought into her heart the joy of a great confidence and the incentive to a character of rare beauty. While things domestic and social had a great’ charm for her the services of God’s House, the communion of the saints, the reading of the Scriptures and the exercise of prayer had for her the supreme place. Hannah Rosier was one of the saints of her generation making it easier for men to believe in goodness and truth. As long as she lived the influence of what she was in her simple goodness tended to widen the borders of the Kingdom of God.

For several years before the end came she suffered very greatly. But in the midst of her affliction she knew but the one confession “God knows.” This made her strong with an endurance upon which the tides of suffering and temptation broke in vain.

When we laid her frail, worn body in the quiet God’s acre of Shalbourne we did it in sure and certain hope that for her there awaited a glorious resurrection.