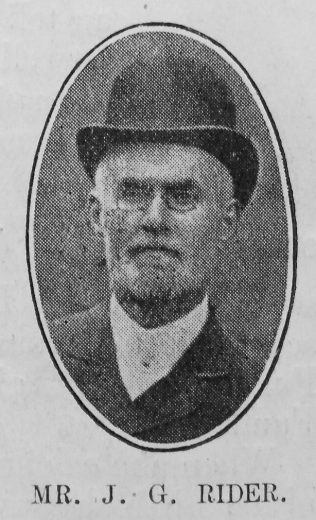 Transcription of Obituary published in the Primitive Methodist Magazine by R.H.

MR. JOHN GEORGE RIDER, of the Gilkes Street Church, Middlesbrough, entered into rest at the early age of forty-seven. His mother was one of the earliest members of the first cause in Middlesbrough. Our brother was converted when quite young, and his life thenceforth was one continuous consecration to God. For many years he was secretary of the Sunday School. He was also the oldest member of the choir and for a long time filled the dual capacity of Trust secretary and Society steward.

Our brother was every inch a man, strong in thought, independent in action and having always the courage of his convictions. He never intentionally said a word to wound the feelings of another. Nothing could move him from the path of duty. He was absolutely sincere and will be long remembered as one of the most devoted servants the church at Gilkes Street has ever had.

Though his illness has been severe yet his death was calm and peaceful. The funeral service at Gilkes Street Church was conducted by Rev. R. Heppenstall, assisted by Rev. D. Cook. Our brother was carried to the Linthorpe Cemetery by his fellow-workers in the N.E. Railway Offices. As we laid him there we thought that he had served his day and generation by the will of God and fallen asleep.

John worked as a railway clerk.

He married Mary Ann Motson (1865-1940)  in the spring of 1890 in the Glanford Brigg Registration District, Lincolnshire. Census returns identify two of three children.