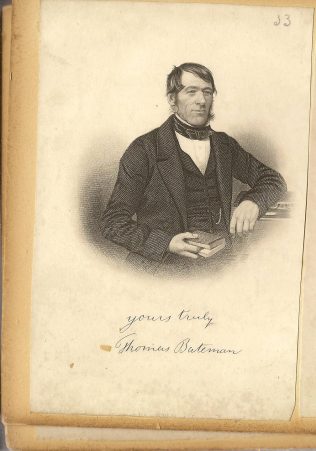 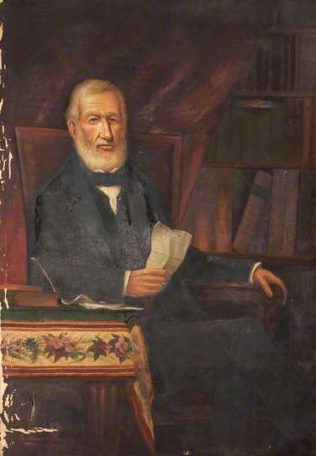 Thomas Bateman was one of the most influential laymen in the early years of the Primitive Methodist Church.

Thomas was born on 29 October 1799 at the settlement of Frith, near Wrenbury, Cheshire. His parents were John, a farmer and land surveyor, and Elizabeth Bateman. Thomas was baptised on 1 January 1800 at Wrenbury Parish Church. In his early years he attended both the Anglican church and Faddiley Wesleyan Methodist Chapel on an occasional basis. Later both the Anglicans and Methodists courted him to become a clergyman but their offers were declined.

Thomas came under the influence of the preaching of John Wedgewood in 1819 during his mission to Cheshire. Having declined an invitation to attend John Wedgewood’s service at Bulkeley, Thomas was influenced by those who had attended. Through his friend George Taylor, Thomas was gradually drawn in to the primitive fold, attending class meetings for some time before committing to membership and again when starting preaching it was some time before he allowed his name to appear on the plan. However, once committed, he preached regularly for over 50 years. During his first 12 years as a Local Preacher he did not miss one Sunday often walking up to 40 miles to complete his appointments.

Contributions to the neighbourhood

Thomas was a farmer and later a land surveyor. The 1851 census reveals that he farmed 165 acres and employed 4 labourers and one boy. He was also trustee and treasurer to many charities in his native parish of Wrenbury.

Thomas also helped to build chapels. The Primitive Methodist Chapel in Welsh Row, Nantwich, built in 1840 (now closed), is attributed to him

Thomas married Ann Salmon on 20 June 1833 at Barthomley Parish Church. Ann was born abt 1807 in Barthomley, Cheshire and died in 1885.

Thomas became a Deed Poll Member in 1851. He was one of the few laymen to become President of Conference in 1857 and again in 1867. In all he served his church in almost every representative capacity possible to a layman.

Kendall quotes extensively from his Journals in describing the development of the church in Cheshire. He also authored a memoir of the life and labours of John Wedgewood, 1870.

Kendall also quotes from a book “Observations on, and Explanations of, the Deed Poll of the Primitive Methodist Connexion,” by Thomas Bateman that seeks to explain the importance of the Deed Poll, signed in 1830, and the reasons for the delay in its preparation.

Barber relates; ‘ He had an eye for essential things; although he claimed to be a thoroughgoing Primitive Methodist he still professed to be something higher than that – he wanted to be a Primitive Christian.’

There is a memorial garden at Chorley, nr Wrenbury where a granite obelisk stands in memorial to Thomas. It is inscribed ‘In memory of Thomas Bateman of Chorley, an associate of Hugh Bourne, and one of the fathers of the Primitive Methodist Connexion’.

J Petty, The History of the Primitive Methodist Connexion, 1880, p.166

Rev David Leese “This amiable family” – Hugh Bourne and the Deakins of Rushton, 2004

A memorial of the centenary on the venerable Hugh Bourne: Earnest Methodists; Sketches of eminent Primtive Methodist Ministers and Laymen, Published by F H Hurd, 1872