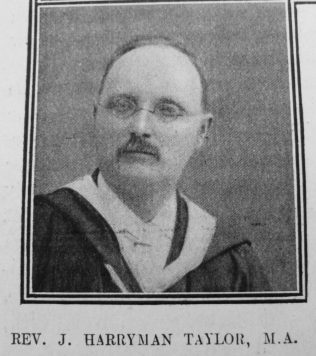 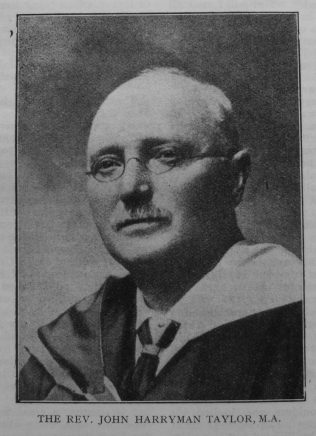 Transcription of Obituary in the Primitive Methodist Magazine by T.H.C. (Thomas Henry Champion)

John Harryman Taylor reminded many of those who knew him of the portrait of Henry Drummond drawn by G.A. Smith. He seemed born good. If there was any severe spiritual strain in his life he did not reveal it readily. He showed us a Christianity which was perfectly natural. He had advantages. His father, Rev. John Taylor, was an ardent evangelist and a man of strictest honour. One of the stories which his son would tell to his friends concerned the scrupulous way in which the father filled up the Income Tax forms. It was to the boy a revelation of reverence for the august sovereignty of truth. The son became one of the straightest men we ever met. The shadow of a lie was intolerable to him. Born in 1867, at Brompton near Northallerton, he was educated at the Royal Grammar School, Newcastle, and St. John’s College, Cambridge. He graduated in Mathematics in 1889 and later received the M.A. degree. While an undergraduate he began to preach and heard his call to the Christian ministry. He chose to serve in the Church of his boyhood, and remained loyal to it under conditions which test that quality of heart. Seeking a still more adequate equipment for his work, he took a three-years’ postgraduate course at Mansfield College, Oxford; under Dr. Fairbairn and his colleagues, one of whom was Mr. A.S. Peake. It was through Mr. Taylor that the young tutor and Mr. W.P. Hartley were brought together, with results for the education of our ministry which are common knowledge but none the less remarkable.

In view of his special qualifications, Conference at once placed him on the Approved List and he was stationed at Reading. It was there that the present writer first came to know him. The membership of the Church by the side of which he lived was composed almost entirely of factory “hands.” We knew that he was exceptional in many ways, but the only “superiority” of which we were conscious was that of the man’s character and of that he was unconscious. He did not know that his face shone. To some in those first days he became the ideal minister. It is saying much that he was never deposed from that place in their esteem. While at Reading he married Miss Annie Harbottle of Newcastle-on-Tyne, an ideal union of mind and heart. From Reading he went to Newcastle-on-Tyne where his work at Kingsley Terrace is particularly remembered. Then followed terms of service at Manchester (Great Clowes Street and Great Western Street Circuits), Matlock, Birkenhead, Northampton, Whitby and Saltburn. In every case his was a distinguished ministry.

As a preacher he belonged to an order not very common in our church. Unlike his father, no one would have selected him as a model for an Evangelist. Yet if the evangel means good news, then the man who stepped into the pulpit with such a radiant face was surely a bringer of good news. “You have no sense of sin” one of those who knew him well used to say when in a critical mood. It probably was not the exact truth but it indicates the fact that he did not loiter in the shady parts longer than necessary. He was a master of a singularly pure Saxon style. Those who were accustomed to more florid styles found some difficulty at first in appreciating it at its real worth. But he wore well. And he could paint great pictures with simple words. Probably he never preached better or with more acceptance than in his last years. He was a great teacher; how great only those who sometimes sat alone with him in his study knew. He could make difficult things appear simple. He surprised some who thought that they knew him well by his unusual business ability. There was no slackness in administration with him. One of the grumbles in which his friends indulged was that he was so prompt in replying to their letters that they were always in his debt. He served our Church for many years as Secretary of the Probationers Examining Committee and later as Secretary of the Students Examining Committee, and was appointed a Director of the Insurance Company and Chapel Aid Association shortly before his death. Many have felt that he scarcely came to his own. But who knows? To leave his mark deep on the mind and heart of young men, and that mark one of a Christian gentleman who was the soul of honour, is a great thing to accomplish. It may be hero worship, but up and down this land there are men who feel that it is as impossible to write his life as to write the natural history of a fragrance to borrow from G. A. Smith once more.

Because of the state of his health he superannuated after thirty-six years’ ministry and settled at Windermere. There he was not inactive, and no preacher was more welcome in our church at Kendal and in the pulpits of other churches than he. After a short illness he passed away on 6th February, 1931. The funeral service was held in the Carver Memorial Church and was conducted by his intimate friend Professor A.L. Humphries. The sun shone brightly on the winter’s day when we laid his body to rest by the side of the waters of Windermere amid the beauty he had always loved. But it was not of the beauty of mountain and lake that we thought as we came away but of the grace and strength of one on whom the beauty of the Lord had rested.

John was born on 21 March 1867 at Brompton, Yorkshire, to parents John Taylor, a PM Minister, and Elizabeth Harryman.