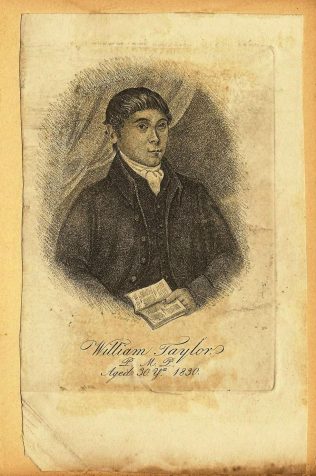 William was born in Tunstall in 1800 to parents Samuel and Sarah. William trained as a potter. He became a member of the Tunstall PM Society at the age of 18 and soon was on full plan. Economic conditions required William to move to Don Potteries in Yorkshire in 1819. He was soon leading 3 classes and preaching 2-3 times per week. In 1820 the Sheffield Circuit sponsored him to travel.

Petty relates that on 16 July 1820, William and another (Sister Perry) stood up in Huddersfield market place and began to preach. Constables rudely interrupted them and took them into custody. In prison they prayed and sang praises to God. A multitude of people gathered outside, many of whom sympathised with them, and gave them food through the bars of the prison. The following day, despite not agreeing to a request to not preach in the town again, the magistrate freed them without a fine.

William continued on to Wakefield and then Barnsley with much success.

William’s obituary records; ‘He had lofty views of the Gospel, but humbling ones of his own talents as a preacher thereof; he considered himself an unpolished instrument’.

William died on15 August 1849 in Gainsborough.