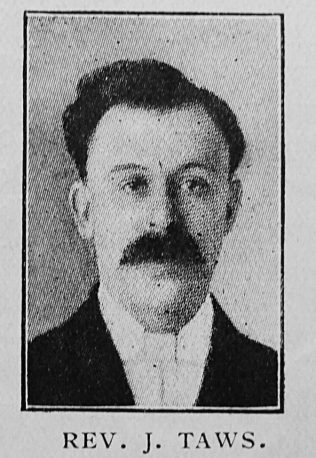 JOHN TAWS: born at North Shields in 1871. He entered the Primitive Methodist Ministry in 1895, and soon revealed the qualities of an effective and vigorous preacher. The Christian Endeavour  ovement was then prosperous, and he made full use of it to secure many disciples for Christ and workers in the Church.

His sermons were evangelical and practical, and were delivered with passionate earnestness. His unconventional, friendly spirit made him an excellent pastor, beloved by his people. Perhaps his best work was done amongst the miners of Derbyshire, Northumberland, and Durham, where he had extended terms.

He was esteemed for his personal humility, his obvious sincerity, and his fearlessness. By his life, as by his speech, he commended his Master to men. In 1932 he became a Supernumerary and made his home in Morecambe, but personal and domestic affliction shadowed his later years. He complained little, for his natural buoyancy of spirit enabled him to make a brave fight against circumstances, and above all he trusted the wise and loving providence of God.

He died suddenly on r4th November 1945 at the age of seventy-four, in the fifty-first year of his ministry.

John was born on 5 April 1871 at North Shields, Northumberland, to parents John Taws, a waterman (1871), and Elizabeth Bourn.

Before entering the ministry John was a grocer’s assistant (1891).

He married Martha Grieves (1877-1947) in the summer of 1900 at North Shields, Northumberland. Census returns identify one child.