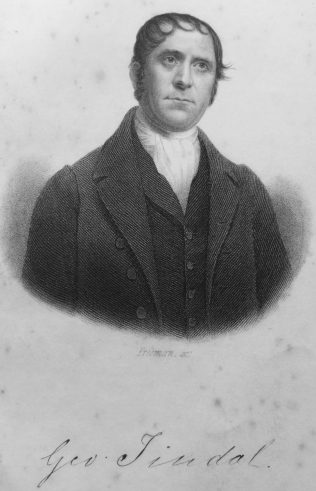 Rev. GEORGE TINDALL was born at Etton, near Beverley, Yorkshire, August 1, 1799, and was converted at North Burton, a village near Bridlington, when sixteen years of age. At an early period he was the subject of religious impressions, and through the earnest ministry of that age he was brought to the truth. He at once united with the people of God, and became an earnest worker for Christ. He was soon called into the full work of the ministry, and commenced his career before he reached the age of manhood, and was especially successful in the early days of the Connexion, being associated in the course of his ministry with such well-known men as Hugh Bourne, William Clowes, John Oxtoby, John Fletcher, Thomas Holliday, the Garners, Parkinson Milson, and T. Newell, and it is thirty-four years since he chose Driflield as his settlement when placed on the superannuation list.

He had been thirty-three years in active work, and had travelled in some of the most important circuits, such as London, Nottingham, Hull, etc. He did a great deal of preaching after his retirement, and until a few weeks before his death he was a regular attendant at Driffeld Chapel.

Brother Tindall was generally brimful of interesting reminiscences of the early days of the Connexion, when such persons as he throve on twelve shillings per week, and often walked twenty miles a day, and preached three or four times. He was in dangers often, and suffered imprisonment for the cause of Christ. The vanities, frivolities, and vicious amusements of his day were topics frequently introduced into his sermons and conversation, and denounced by him. As a preacher he had not the finish of the scholar, the rhetoric of the orator, nor the correctly constructed sentences of the grammarian, valuable as these are in their place; but what he had was before all these, and of greater value, namely, the clearest evidence of his divine call to preach the Gospel. He well understood the way to the cross, and the plan of salvation, and could tell sinners what they must do to be saved. He preached what he lived in everyday life, and what he understood in head and heart.

He was a good man; the people believed he was right and true. He generally spoke with good effect, and sometimes with great power; often the ungodly trembled while he was praying or preaching, and saints shouted for joy. He was a bright and shining light. For over seventy years he lived as a Christian man, and nearly all that time he went about his country preaching Christ.

In his last days he had great peace, at times ecstatic joy. He often spoke of his future and eternal rest, of his friends and Saviour, and of his home in heaven. Hope exhilarated his spirit, and heaven beamed in his countenance. His religion was not a mere sentiment, an orthodox creed, an empty profession, it was solid, sober, sound, real, and his death was a grand finish to a long life, a triumph through grace. He waved his hand as a victor who had fought a good fight. As soon as I heard of his illness I went to see him. When I got into the house I saw him sitting by the fire. I said, ‘Brother Tindall, are you ill?’ He answered, “Yes. I have sent for my daughter to come from Hull, and as soon as she comes I shall go to bed and die.’ I thought, How beautiful!

Our brother was not medically attended during his last illness. He had great aversion to doctors, and he died of natural decay, in the presence of his wife and only daughter. He told the writer he would as soon die as have his dinner. During his last hours it was with great difficulty that he could breathe, while being propped up with pillows. His friends said, ‘You cannot find rest for the body.’ ‘Rest of body!’ he said, ‘I can find something far better. I have rest of soul. This body is the earthly house, and will in a few days be gone; but I am on the Rock, and do not think that the prospect of death is to me a source of fear.’ In his last moments he said, ‘I have fought a good fight, I shall lay hold on eternal life.’ And about eight o’clock on Thursday morning, August 1, 1889, he left the field of conflict triumphantly, to wear the conqueror’s crown. His funeral took place on Sunday, August 3, in the cemetery at Driffield, amidst the attendance and respect of hundreds who revere his memory, and his death was improved in the evening by the writer.

George Tindall Journal Extracts (29 KB Adobe Acrobat document, opens in a new window)
Extracts of George's journal for 1822 when he was missioning in the area of Preston on behalf of Hull Circuit.