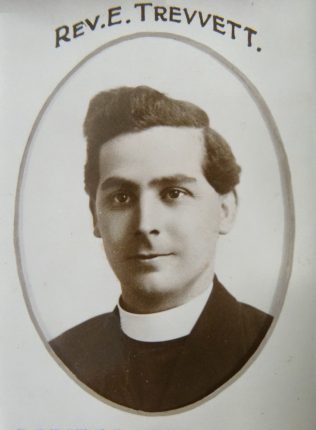 EDGAR TREVVETT: born in Leeds on 6 January 1890, the son of a Methodist Pastor, in a home of strong religious principles. Early in life he was converted and as a result became a dedicated Christian. In 1916 he went to Hartley College. Soon after entering college he was taken out for circuit work owing to the death of a minister. He went back again in 1920. He travelled in many circuits including Sleaford, Bridlington, Gloucester, Wirksworth, Oldham, Redruth, London, Grimsby, and Leeds.

In all his labours he set Christ before his people. He had a radiance, serenity, and gaiety of spirit that particularly attracted the young people. Through the spirit of his service people saw the splendour of the Saviour. He loved people and visited them often and as a result they loved him. In his preaching he was quiet, thoughtful, and persuasive. There was nothing shoddy or slipshod about his work for Christ. Methodical in his ways, he proved himself to be a good administrator and a man of sound judgement. Only the best was good enough for his Master and Lord. The steady flame of his faith in Christ never became dim or dull.

Toward the end of his life he revelled in talking of the glories and wonders of His Saviour’s love and power. In all the circuits he won souls for the Saviour and left an enduring impression of Christ’s love and care among his flock. Friendship for people through Christ was the outstanding quality in his life. His home was a happy place and the atmosphere of the home helped to make him the friendly man of God he proved to be. At the centre of his life and labours was Christ the Saviour, Lord and Master.

He died on 12 June 1966, in the seventy-seventh year of his life and the forty-seventh of his ministry.

Edgar was born on 5 January 1890 at Leeds, Yorkshire, to parents Joseph Trevvett, a PM evangelist (1891), and Eliza Ann Clarke.

He married Margaret Paxton (1892-1989) in the summer of 1922 in the Lanchester Registration District, Co. Durham. Birth records identify one child.