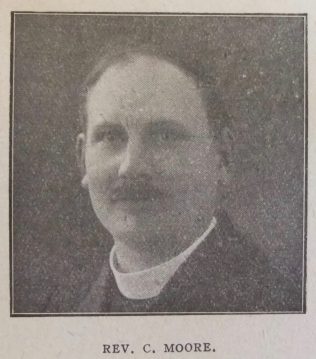 The Rev. C. Moore comes of a splendid Yorkshire Methodist ancestry, being born on February 26th, 1878. His father was a local preacher in South Holderness for forty-eight years, and had the grand record of having never neglected a single appointment. Charles was the youngest of a family of nine. That he is in the true Primitive Methodist succession is proved by the fact that his grandfather was a member of William Clowes’ class at Hull. One of his brothers is the Rev. W. Moore, of the Patrington Circuit, and three other brothers are local preachers. Charles left school when fifteen years of age and took to work on the farm. He loved the agricultural life and showed great proficiency in it. Nevertheless, he heard the higher call to the ministry of the Church. His brother, Henry, is on the same farm to-day.

The Call to the Ministry!

Our Friend has always had the assurance of the call of God to the ministerial life, and his years of ministry have abundantly vindicated that. He took the examinations in 1901, and in the same year entered Hartley College. After two years there he went for his probation to the Northampton First Station. Here he had a fine experience, and he was very successful also in his probationary studies. In the third and fourth years, indeed, he took the premier place. For one of his Hebrew papers he secured ninety-nine marks out of a hundred, and received the congratulations of the Rev. John Day Thompson. Five years were spent on the Oldham First Station, and in 1912 he went to Heywood. He is now in his sixth year, and in July proceeds to Buckley, He has seen splendid success there. At Bridge Street, where we have a Sunday School of five hundred scholars, they have an average attendance at the congregational morning service of a hundred. He has always given attention to the young people of his churches and made a point of training local preachers. Of these, three are young ladies whom he has tutored for the plan. He is one of the sub-tutors, also, in the Manchester District of Local Preachers’ Training-classes. As the Secretary of the District Christian Endeavour Committee, he is brought into touch with the Christian young life of Lancashire. He was a member of the Derby Conference.

Busy as he is in his own Churches and Circuit he wisely co-operates in everything in the town which helps to the coming of the Kingdom of God. He is the Secretary of the Heywood Branch of the British and Foreign Bible Society. We trust that many years lie ahead of him, and feel sure that they will all be filled with noble and devoted toil.

CHARLES MOORE: born in 1878 at Cowden, East Yorkshire. He was the son of a Hornsea farmer, and he and his six brothers all became local preachers. He entered the ministry of the Primitive Methodist Church, and, on leaving Hartley College in 1903, he began his circuit life at Northampton, and from then onward travelled almost entirely in the Lancashire and Cheshire Districts. He stayed an extended term in every circuit, and returned to Oldham for a second term. Wherever he went his ministry was marked by a passionate concern for people, which dominated all his preaching and pastoral work. Though he was a wide reader and a student all his life, it was with men and women that he was essentially concerned. Under his inspiration and guidance many young men began to preach and a few later entered the ministry. On his retirement in 1946 he made his home at Tarleton in the Ormskirk circuit, and there gave himself unsparingly to the preaching and pastoral work he loved so well. He became a father in God to the whole village. Homes were everywhere open to him, and the demands on his services were only limited by physical necessity. He proclaimed constantly the comforts and certainties of the faith that were born of his own experience. It was while speaking to the Guild on ‘ The Way to Heaven’s Door ’ that he paused for a moment and then immediately slipped into the homeland quietly and without pain. Nothing befitted him more than his end. He died on 25th January 1955, in the seventy-sixth year of his age and the fifty-second of his ministry.

Charles was born at Cowden to parents Richard and Annie. Richard was a farmer.