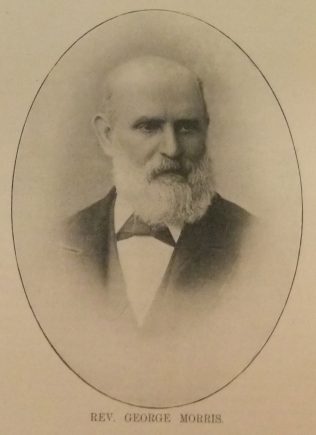 George was born in 1842 at Newport, Isle of Wight to parents Charles and Ann. Charles was a tailor.

George was converted circa 1859, after he had aimlessly walked into the Pyle Street Chapel, where the service was being conducted by Rev E.C. Pritchard. In a short time, William became Sunday School teacher, exhorter and local preacher. He twice declined the call to ministry, because of conscious educational unfitness, but accepted a third call. In 1867, William was placed on the reserve list and in September of that year was sent to the Liverpool II circuit.

George served for eight years as the Secretary of the District Building Committee in the Brinkworth and Swindon District.

His obituary records that George endeared himself to a large circle by his kindliness of disposition. He was most unselfish and constantly devoted himself to others. There was a buoyancy and youthfulness in his nature which enabled him, even in later years, to enter into the feelings of the young. Probationers who were privileged to be his colleagues were enthusiastic in testifying to the help and inspiration they received from him.