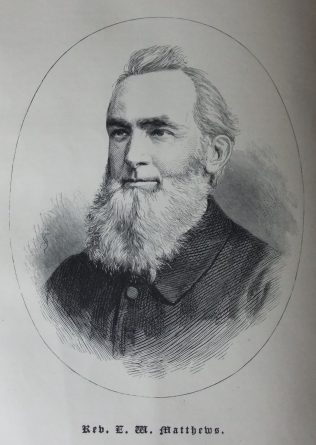 Edwin was born on 31 December 1822 at Newport, Monmouthshire. His father died when Edwin was four leaving a widow and a large family. Edwin was sent to work in the iron stone mines at a very young age. He attended a Wesleyan Sunday School.

Aged 16, Edwin moved with his mother to Abersycan. Shortly afterwards, he was invited to attend a Primitive Methodist class meeting and there declarerd for Christ. After conversion, Edwin put himself through school for 12 months, paying the fees out of his savings. His name went on the plan and as a local preacher he was eminently successful in winning souls.

Edwin was recommended for the ministry by John Ride and received a call from the Bristol circuit. He declined because his mother was dependent on him. However, his mother died suddenly and he received a second call from Pillowell, which he accepted after hesitation, consideration and prayer.

Edwin’s obituary records that he possessed a robust constitution; a stentorian voice; fervent zeal and a mighty faith. He was an interesting an powerful preacher, a good pastor, and a kind and considerate colleague.

Edwin married Elizabeth Cowling (1826-1873) in the summer of 1856 at Truro, Cornwall. Census returns identify one child.