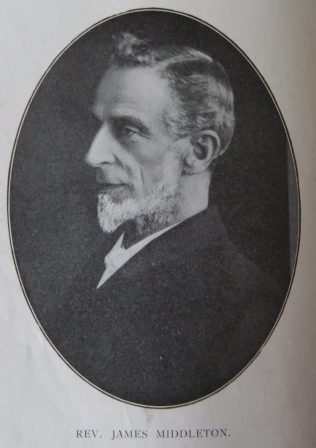 James was born in 1852 at New Mills, Derbyshire.

James travelled in many industrial centres in the South Wales District, where strike and lockout were somewhat frequent events. James was able to provide guidance to societies in those times of unrest and assist in relief work for the most urgent situations.

His obituary records that in the grim days of the war, James was a tower of strength to the anxious and the bereaved. Of a sunny and trustful temperament, he often said, ‘the best is yet to be.’

James spent some time serving on the Probationer’s Examining Committee.

James married Hannah Maria Walch (1848-1929) in the summer of  1883 in the Prestwich Registration District. Census returns identify one child.