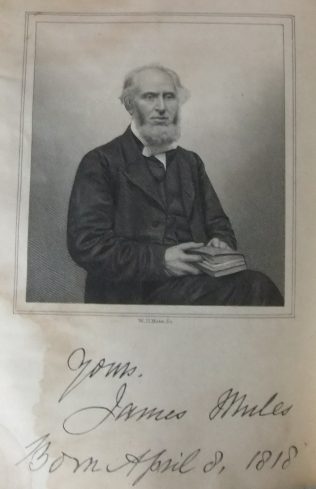 In his early life he is described as being ‘gay and frivolous’. It is said that he drank and gambled freely. He was converted at the age of 18. Once converted he at once identified himself with the temperance cause and became a zealous and successful advocate thereof.

Petty describes significant progress at the Southam branch in 1848 when James was superintendent. He also records progress in the Luton circuit in the period 1856-8. Near 100 members were added in this period.

His obituary records; ‘As a preacher, Mr Mules occupied a good position. He made no pretentions to originality of thought or illustration. Nor did he presume to leave the beaten track of Methodistic modes or manner of presenting doctrinal truths. Nor was there any attempt at display in his preaching. His pulpit efforts came fairly within the category of the respectable, and were never ribald or frothy on one hand, nor coarse and vulgar on the other.’