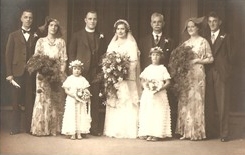 Born in Blackburn, Lancashire in 1908, Frank Manning was the son of Albert Arthur and Abigail (née Smallwood) Manning. In 1911, the Manning family were living in Pritchard Street, Blackburn and Albert was employed as Secretary to an Iron and Steel merchants. Albert was a local preacher and Circuit Steward.

Frank was educated at Queen Elizabeth’s Grammar School, Blackburn before training at Hartley-Victoria for the PM ministry. Leaving college in 1931, Frank commenced Circuit work in Canterbury. In 1935, Frank married Blackburn born Enid Dawson. Enid was born in 1903, the daughter of Jim and Emma (née Betts) Dawson.

Circuit work continued for the remainder of Frank’s life. His obituary in the Minutes of Conference describes him as, ‘a man of great humility and patience, often diffident about his own abilities’. During World War II, Manning’s ministry influenced American soldiers and Pioneer Corps. The breadth of his ministry is outlined in his obituary. This ranged from visiting the Sunday School, ‘fostering Men’s Fellowships, pastoral work, Christian Citizenship to redecorating the church. Aged 56, Frank died suddenly in Blackburn on 24 May 1965.

W Leary – Directory of Primitive Methodist Ministers and their Circuits, 1990