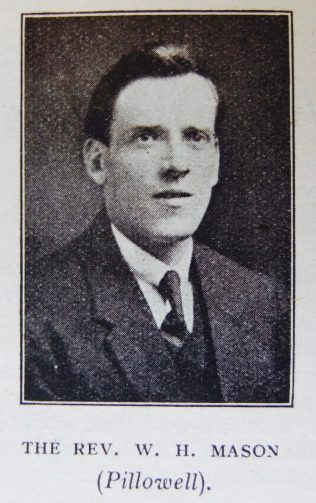 WILLIAM HENRY MASON: born at Harrington, Workington, on 18th February 1893. His teenage years were influenced by the fellowship of Ella Bank Methodist Church from which he offered as a candidate, entering Hartley College in 1914. In 1915 he, along with fellow Hartley students, volunteered for military service, joining the Royal Army Medical Corps, an experience which he described as ‘fairly easy in comparison with the life of the infantryman, until things became a little more dangerous with the arrival into warfare of the tank‘! After World War I he completed his training at Hartley Victoria College and in 1920 was sent as Superintendent to the Kingstone Circuit where he married Margaret Bird. It was a short marriage as ‘Maggie’ died of tuberculosis in 1922 in  William’s second circuit at Pillowell. Burnley ll followed, then Leominster where in 1928 he married Mary Elizabeth Hudspith – his beloved ‘Cissie’ who shared almost fifty years of devoted companionship with William and his three daughters: Tilly, Connie and Olive. In 1931 he arrived at Oakengates where he demonstrated his practical compassion by training unemployed miners the skills of shoemending. In this activity he was unknowingly one of the pioneers of current re-training schemes. Further service followed at Knowlwood, Willington, Northallerton, Boroughbridge and Wigton Circuits. On retirement in 1956 he moved to Newcastle, but eventually settled in Wetheral in Cumbria where he and Cissie enjoyed over twenty years together before she died in 1978 shortly before they were to celebrate their Golden Wedding. At Wetheral he enjoyed his hobbies of gardening and bowling, and was also a faithful member of Wetheral Methodist Church where he became a steward whose prayers in the vestry before the commencement of the service were always appreciated and will be remembered by those Ministers and Local Preachers who were privileged to share in fellowship with him. Reminiscing on his life, he felt that he would have liked to have worked as a farmer, instead he was called to the Ministry, and Methodism gained a dedicated and greatly loved pastor. William died of cancer on 13th March 1988 in the ninety-sixth year of his life and the seventy-second year of his ministry.

William was born on 18 February 1893 at Harrington, Workington, Cumberland.

William married Margaret Bird (1895-1924) in the spring of 1920 in the Whitehaven Registration District, Cumberland. Birth Records identify one child.