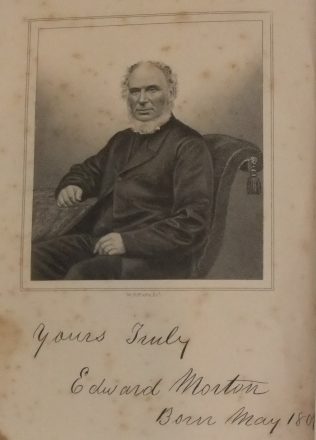 Edward was born on 18 May 1807 at Countesthorpe, Leicestershire, where the Luddites’ barn for the storage of ammunition was turned into a place of worship. Edward was converted when he was 19.

Edward was engaged as a town missionary at Nottingham in 1838 under the superintendency of John Brownson. His duties included preaching in the room rented in Robin Hood’s Yard twice on Sunday and on Tuesday and Wednesday evenings. Additionally, he preached in the open air whenever possible, visited people in their own houses, distributed religious tracts, and read the scriptures and prayed with those families where there was an opening. The expense of the mission was partly supported by subscription. The work prospered and when, in the autumn of 1839, the Wesleyans vacated the historic Hockley Chapel, opened by Wesley and Dr. Coke in 1783 , the Primitive Methodists were encouraged to purchase the larger building for the sum of £2,400 .

Edward Morton, by his extensive labours as a town missionary, prepared the way for this notable advance, and having thus given proof of his powers, he was admitted into the regular ministry, and in 1841 we find him living at Arnold as Branch Superintendent. He at once took energetic measures to recapture surrendered Hucknall. He missioned the streets and preached on the green. At the close of the service he inquired for Robert Hutchinson and William Allen. The two were on the spot, and responded to the call. Robert Hutchinson did not fail the missionary in the time of need; he opened his house for preaching, and it continued to be the preaching-place for the society until 1848, when, now increased to thirty members, the society migrated to a room in Allen Street ; and for a period of forty-six years this frame-work knitter, employee and, in later life, pensioner of Samuel Morley, M.P., of Nottingham, filled and fulfilled the offices of Leader and Society Steward.

Edward Morton from Arnold was appointed Missionary to the village of Woodborough in 1841. Although he had met with opposition in other villages, and even here, there had been an attempt to push him into the dyke, he proved too tough and encouraged a formal class to be formed. These people met in William Bradley’s cottage, led by Henry Bird of Oxton. Later a barn in Field Lane that had housed cows was used for services. The barn was fitted with wooden plank seats, with straw on the floor and illumination from three tallow candles set into a wooden wheel. This was lifted by a rope over a beam and balanced at the other end with half a brick.

Petty records the missionary activities of Edward at Summercotes from April 1843. There had been damaging divisions on this mission station in the late 1830’s, but Edward succeeded in establishing societies at Crich, Swannick, Green Hillocks, and other places where in due course chapels were erected.

His obituary records that, as a minister, he tried to gather, and then distribute; he read and thought, and then he gave the results of his reading and thinking to the people. He was plain and practical in his preaching; not so much ornamental but useful.

Edward died on 9 May 1880 at Scarborough, Yorkshire.