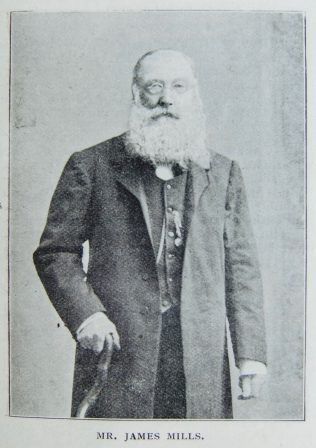 Transcription of Sketch in the Christian Messenger by William Holme

Mr. JAMES MILLS, whose portrait we here present, was born at Wigan March 24th, 1824. In early life he lost both father and mother. His grandmother took charge of him, and when he was twelve years of age he was apprenticed to a good godly shoemaker. He was soundly converted at the age of fourteen, and then joined the society and became a member with the Wesleyan Methodist Society at Ormskirk, there being no Primitive Methodist cause in the district.

About 35 years ago he came to Chorley, and at once joined our society, became a teacher, and ultimately a superintendent of the Sunday school. About this time he was appointed a society leader, and devoted all his energies in advancing the interests of the church and Sunday school.

The old chapel in West Street was supplanted by the present beautiful chapel in Cunliffe Street, and Mr. Mills and his fellow-workers have reared a monument which reflects great credit to their spirit of faith and enterprise. He was one of the first trustees, and is still our senior active trustee. He still is a class leader, and is always found in his place in the Sunday school, surrounded by a large class of youths, about 16 to 18 years of age. About two years ago Mr. Mills lost his help-mate, with whom he had lived in peace and harmony for 51 years. The trial was heavy, the blow was severe, but amidst it all he maintained an unswerving loyalty to God and a humble submission to His will.

He is still active, humble, and useful. He retired from business some years ago, and now devotes much time to looking after the interests of God’s House.

I have not been able to determine when James died.