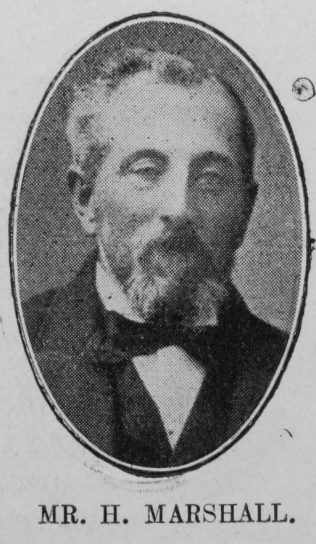 Transcription of Obituary published in the Primitive Methodist Magazine by J.W.L.

Mr. H. Marshall, Peterborough 1st Circuit, was born at Rudham, in Norfolk, September 28th, 1841. His parents were God-fearing people and members of our Church. He was converted to God when seventeen years of age and this will account in no small degree for his success in life.

The church soon saw that there were in him capabilities for usefulness and proposed him for the plan as a local preacher, and for about forty years he served his Master faithfully in this capacity. He was strikingly original in his preaching and under his ministry people were blessed and helped. He did not confine his labours to preaching but was always ready to shoulder any burden there might be. At one time he lived in Sheffield and was united with the Petre Street Church. At Grimesthorpe, a place in the Circuit, they were about to build schools, but were sadly in need, of funds, and in his enthusiasm he consecrated himself to the work of collecting in the neighbourhood and in a comparatively short time obtained £100 for the building fund.

He was a most generous giver to the cause. Even on his dying bed he showed his anxiety to discharge all financial liabilities connected with his church, and not many hours before he passed away He paid to the full his promise to the great Centenary fund.

The social or private means of grace were ever precious to him, especially the prayer meeting and class meeting. About twelve months ago he suffered from an attack of influenza from which he never fully recovered. His sufferings at times were great, but through it all there was no murmur, though he often expressed wonder at the goodness of God. On the last night as the loved ones were gathered around him, he caused the death chamber to resound with songs of triumph and victory.

The interment took place on Thursday, Nov. 12th. The services in the Cobden Street Church and in the cemetery were conducted by the Rev. G.B. Gleghorn, assisted by the Rev. E.W. Lees.