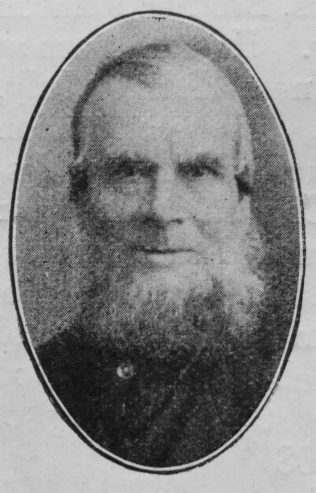 Among the men of integrity and principle who have lived and laboured in the Driffield Circuit, Isaac Miller filled an honoured place. Born at Driffield, October 6th, 1821, he died August 28th, 1907. From a boy he was associated with our church. While quite young the deepest religious impressions were made upon his mind and continued until he was converted to God. It was his custom to attend the means of grace such as the class and prayer meetings before he became a member of the church, but though he did not run openly into sin, when the crisis came he felt obliged to decide openly for Christ and the sense of sin and struggle for the new inward life was a sharp and narrow passage.

Our brother occupied most of the offices of the church. For years an efficient Sunday School superintendent, he was also an exceptionally useful local preacher and class leader, a trustee of one of the finest chapels in the Connexion and circuit steward for years.

Isaac Miller was a loyal Primitive Methodist. Deeply interested in his own circuit he had also a generous interest in every Connexional enterprise. After he had made important arrangements for the support of the Missionary funds to the extent of thousands, the last act of his generosity was to give £100 to the Centenary Fund.

The characteristics of Isaac Miller were clear and outstanding. Of marked individuality, he had a strong will and was decided and unalterable in his purpose when satisfied he was in the right. His affliction was long and painful, and through all his years of suffering he felt a deep longing to be relieved and at home with God. Yet he waited with a firm faith until the change came when he died as he had lived in peace in Christ.

Isaac was born on 6 October 1821 at Driffield, Yorkshire, to parents Thomas, a razor grinder (1841), and Elizabeth.