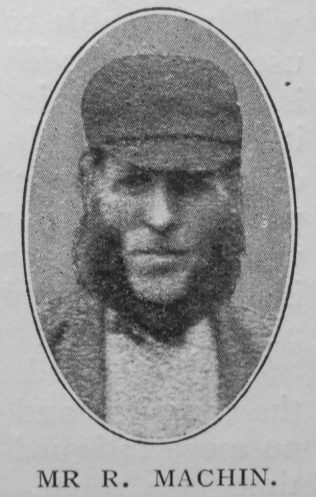 Mr. Richard Machin, of Stainforth, in the Doncaster Second Circuit, passed away on the 22nd May last in his 77th year. He was born in September, 1833, of Wesleyan Methodist parentage, and as a boy was associated with that denomination. When thirteen years of age he was apprenticed to a joiner in the adjacent village of Barnby Dun, and it was while at this village that he came into contact and threw in his lot with Primitive Methodism. When in his teens he was led to give his life to Christ in the little Primitive Methodist Chapel there. In 1861 he removed to Sheffield, remaining there until 1890, when he returned to Stainforth, his native village, and continued there until the time of his decease.

While at Sheffield he associated himself with the Shire Green Society, in the Second Circuit, and occupied the positions of class leader and school superintendent. At the age of eighteen he was given a “note” to accompany a local preacher to his appointments, and for nearly sixty years he maintained an unbroken connection with the Local Preachers’ Plan.

He was married in November, 1861, to Miss Annie Elizabeth Taylor, of Rotherham, who predeceased him nine years ago. For some three years our brother was in failing health, but was only actually laid aside for less than a week prior to his death. Catching a severe chill, he was taken to his bed, and on the School Anniversary Day he was called to be with Christ. Small in stature, nimble in body, vigorous in mind, he was a striking personality in the village; and throughout the Circuit his preaching ministry will be remembered for many years to come. To the surviving daughter, Miss Sarah Machin, we tender our deepest sympathy. With the heritage of a saintly memory may she have the conscious presence of the Divine Comforter in her time of sorrow.

Richard was born in September 1833 at Stainforth, Yorkshire, to parents Thomas, who worked the land (1841), and Ann. He was baptised on 6 October 1833 at Hatfield, Yorkshire.