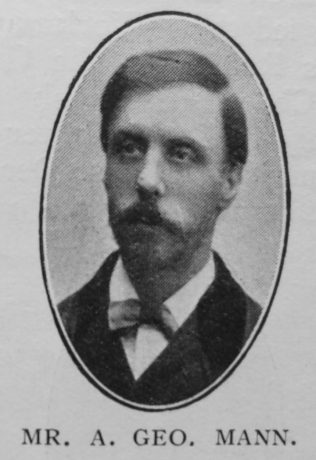 The Grange Road Church, Birkenhead 1st Circuit, sustained a great loss when its Society Steward, the late Mr. A.G. Mann, was called to the higher service of heaven. He was still in the prime of life, and his death was sudden and unexpected.

He was cradled in Primitive Methodism, his venerable father being one of the oldest officials of our Grange Road Church. Our late brother was a Local Preacher for twenty-one years, and at the time of his death. he was Society Steward, a Class Leader, the Teacher of an important class of young men in the Sunday School, and a Member of the District Committees. In every institution of the Church he won his way to the highest positions of trust and responsibility. As an official he could always be relied upon, and the special mark of his character was the thoroughness with which he did his work. He was quiet and unobtrusive, but persistent and faithful, and he always held a high place in the councils of his brethren. His practical commonsense, and his shrewd  statesmanship will be greatly missed by the Church with which he was so closely associated.

The Rev. T.M. Pinnock writes: “During my seven years term at Birkenhead, I had no more faithful or useful ally than he. He never begrudged either time or labour to help me in my work. I remember with gratitude his valuable and helpful services.

The Rev. J. Mayles writes: “I think with gratitude of all Mr. A.G. Mann, was to Grange Road Church. The place was dear to him, and he gave to it his best service. His quiet, persistent, conscientious labours will be greatly missed, and the Church is much poorer for his departure. The interment took place in Bebington Cemetery, January 3rd.

Albert was born abt1863 at Birkenhead, Cheshire, to parents Robert Mann, a ship rigger (1871), and Emma Eliza Coveney. His younger half-brother, David T Mann, was a PM minister.

He married Mary Julia Wood (1859-1928) in the spring of 1883 in the Liverpool Registration District, Lancashire. Census returns identify seven of eight children.